Carbon dioxide (CO2), a major greenhouse gas, dissolves in water and is incorporated by shell-producing organisms into calcium carbonate (CaCO3).  CaCO3 from mollusks and other organisms can persist indefinitely as limestone.  In contrast, the carbon contained in most plant and animal tissues return to CO2 in a few years, at most.  Molluscan shellfish aquaculture, therefore, has two products—food for humans and long-term storage of greenhouse gases. Shellfish aquaculture practices, however, do not produce merely the shells of the product species, but also attached or associated shell-bearing animals, such as oysters and snails.  Under lease siting provisions, shellfish aquaculture is conducted in areas that did not previously support shellfish populations, so most of the associated shell can be considered production that would not have otherwise occurred.

This study was conducted to quantify shell production and carbon association with the culture of hard clams in Florida.  The shells of clams mineralize carbon as calcium carbonate, providing a long-term sink for atmospheric carbon dioxide.  In addition to the clams sold to the market, there are discarded or dead shells as a byproduct of the industry, plus the shells of associated fouling organisms.  Two lease areas near Cedar Key were sampled for this study—Dog Island to the east (27 clams bags) and Gulf Jackson/Pelican Reef to the west (9 clam bags).  Clam bag samples were collected from October 2009 through July 2010 during regular harvests.  Samples were selected randomly by clam growers from the bags they had retrieved on that date.  Each was processed by the clam grower using standard methods, and then the discarded shells and bag were given to the researcher.  Live clams were counted and a random subsample of 20 clams was measured to estimate average shell weight of the sample.  Shell mass per clam bag was determined by adding the estimated weight of the market clams, the estimated weight of the oysters attached on the bags, and other shell that was saved and cleaned. The total weight was then multiplied by 0.96, the fraction of shell that is CaCO3, and then by 0.12, the fraction of CaCO3 that is carbon. 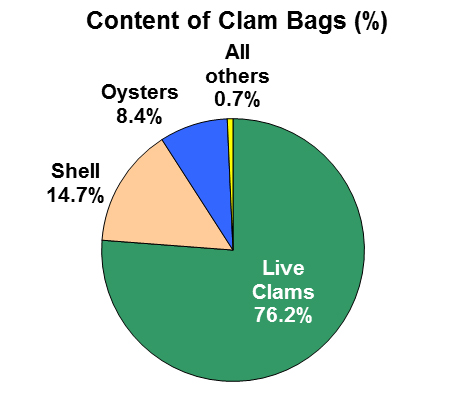 Almost all shell material (>99%) over 5 mm was accounted for by marketable clams (76.2%), shells of dead clams (14.7%), and oysters (8.4%).  The remaining shell fraction (<1%) was divided amongst 39 additional species.  Six-month exposure studies of clam and oyster shells showed no significant dissolution, inferring (as suggested by the fossil record) that clam shells are a stable form of carbon storage.  Laboratory analysis of shells showed that cleaned, dried clam or oyster shell is about 96% calcium carbonate (the remainder is a protein matrix), and calcium carbonate is 12% carbon by weight.  Using these values to adjust mineralized carbon values in samples, total carbon mineralization represented by each clam sold and by the total clams sold by Florida growers in 2007 (185 million, Adams et al. 2009) was estimated.

Summary: It is important to note that the results were obtained using existing clam farming methods; nothing needs to be changed to produce this long-term carbon storage.  It is anticipated that this information will be of use to clam growers at least one and possibly two ways.  First, given public concerns regarding the sustainability of seafood (including aquaculture), clam growers can add greenhouse gas storage to the list of ways in which clams are “green.”  Second, if carbon credits ever become a commodity, clam growers have a value-added byproduct already at hand for which the industry now has a quantitative estimate.  Clam growers may calculate carbon fixation for their farms by simply multiplying the number of clams harvested in a year by 2.93 grams, then adjusting for clam shell, oysters, and other species in their harvested bags by dividing that number by 76.2%. Every clam you eat represents about 3 grams of carbon removed from the atmosphere.  Eat a clam, save the earth!

A poster on project results presented at a state meeting and final report can be viewed below in PDF format.