In less than 30 years, 3,000-year-old oyster reefs off Florida’s Big Bend coastline have declined by 88 percent, according to University of Florida/IFAS researchers. For residents who depend on the fishing grounds and other coastal resources protected by these reefs, it’s a worrying trend. Now, with an award from the National Fish and Wildlife Foundation’s Gulf Environmental Benefit Fund, a UF/IFAS research team will work to restore these shrinking oyster reefs and help coastal ecosystems and economies become more resilient in the face of climate change and rising tides.  The “Recovery and Resilience of Oyster Reefs in the Big Bend of Florida” project will target the Lone Cabbage reef chain in the Suwannee Sound. The UF/IFAS team plans to restore up to 32 acres (encompassing about 3 linear miles) of reef.

Peter Frederick, Bill Pine and Leslie Sturmer are the primary investigators for the grant. They will talk about their research, which shows that the decline of oysters in the Big Bend region is due to increasing salinity levels in estuaries, which is where freshwater from rivers mixes with ocean salt water. Oysters need intermediate salinities, and have die-offs as they get stressed by prolonged periods of high salinity.  Oyster reefs are long linear chains, that serve as leaky dams, keeping freshwater near the coast. As oyster reefs die off and lose elevation, more ocean water mixes with fresh, boosting salinity. Reefs made up of dead oysters eventually disintegrate into sandbars. Oysters can’t establish on sand, so the reef can’t regenerate. The UF/IFAS project wants to break this cycle by encouraging new oysters to recolonize areas where reefs have degraded. To do that, researchers will install limestone boulders covered in a layer of oyster and clam shell, materials that readily attract new oysters.

An introduction to the Lone Cabbage Oyster Reef Restoration Project will be held on Thursday, October 26, starting at 7 p.m., at the Community Center, 809 6th Street, Cedar Key. Frederick, Pine and Sturmer will provide further information on the background of the project, problems with offshore reefs and why they have declined over the past decades, results of the pilot study conducted in 2011-12, and a time line for the new project. A question and answer session will follow over coffee and desserts. For further information about the meeting, contact Leslie Sturmer, with the UF/IFAS Shellfish Extension Program, at 352-543-5057 or Lnst@ufl.edu. To learn more about this project, visit http://www.wec.ufl.edu/oysterproject/. 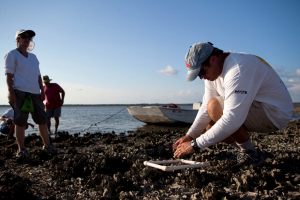 Bill Pine, UF/IFAS Department of Wildlife Ecology and Conservation, counts and measures oysters in a one quarter square meter to calculate how many, both alive and dead, are on the Lone Cabbage oyster reef. UF/IFAS Photo.