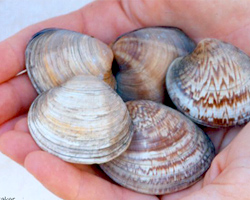 The genetic variation of wild and Florida cultured stocks of the hard clam Mercenaria mercenaria was quantified and compared in response to both industry and scientific concerns regarding genetic health of this important commercial species.  The hatchery-based hard clam aquaculture industry is in its infancy in terms of stock management and genetic improvement.  Hatchery stocks are often selected for the notata strain, a shell color variation (shown in picture) with no other known performance advantages.  Aquaculture geneticists were concerned that selective breeding for one trait, such as shell color, could have unintended side effects.  The major concern is the loss of useful genetic diversity through unintentional inbreeding. Specifically, long-term selective breeding could reduce genetic variability of hatchery stocks. Genetic diversity is believed to be critical when clams are exposed to variable environmental conditions or diseases.

This intent of this study, conducted in 2002, was to determine whether loss of genetic diversity had occurred in cultured clam stocks.  Descriptive molecular genetic techniques were used to examine stock diversity.  Specifically, mitochondrial COI gene fragment sequences were used to estimate genetic diversity in captive strains from six Florida hatchery stocks and in clams escaped from an aquaculture lease area in west Florida.  Researchers intentionally did not know the identities of hatchery stocks.  In addition, samples of wild stocks were collected from east Florida, Georgia, and New York.  The frequency of the notata shell color phenotype was noted in all samples.  The southern quahog Mercenaria campechiensis, a morphologically similar clam species, sometimes occurred in samples.  However, this species showed distinct genetic distance from the hard clam and was removed prior to analysis.

An index of clam stock health in terms of genetic diversity was developed. Haplotype diversity ranges from 0 to 1, with anything over about 0.5 being considered healthy. Wild stocks typically have higher haplotype diversity than hatchery stocks, but some wild stocks also may have reduced genetic diversity due to pollution, disease, or other factors.  In this study, genetic diversity – measured as heterozygosity – of wild populations ranged from 0.76 to 0.91 (mean = 0.84, s.d. = 0.05), compared to 0.43 to 0.9 (mean = 0.72, s.d. = 0.16) for hatchery stocks.  The mean values for heterozygosity varied significantly, but there was a wide range of values for hatchery stocks.  The lowest heterozygosity value reported was 0.43; generally, any value above 0.5 is considered good genetic diversity in a crop species.  Notata shell markings could be used as a rough indicator of genetic diversity; as the proportion of wild type (no notata markings) increased, so did genetic diversity, although this accounted for only about half of the variability in the data.  Two of the hatcheries also had apparent contamination with the southern quahog.  These efforts represent the first at looking at stock management and improvement for the clam aquaculture industry in Florida and provide a basis for further genetic studies.

Presentations on project results were made at state and national meetings. The presentation below can be viewed in PDF format.