Evaluation of Hybridization with Hard Clams and Southern Quahogs 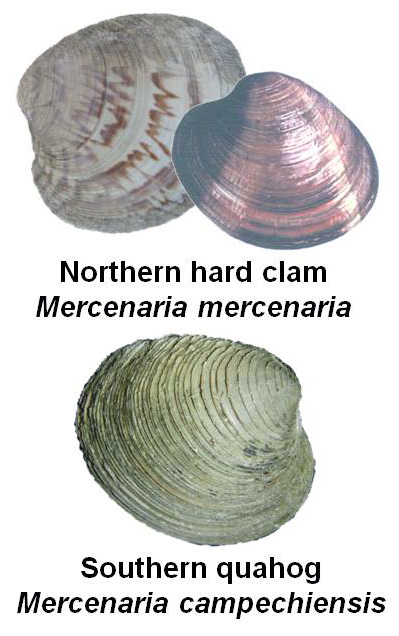 The hard clam culture industry, which extends from Massachusetts to Florida, is based on the notata strain of the northern hard clam Mercenaria mercenaria.  Florida provides an excellent environment for accelerated growth of hard clams. However, the hard clam may not be ideally adapted for our prolonged hot summer months with crop losses often occurring during this period.  The southern quahog Mercenaria campechiensis, commonly found from North Carolina to the Gulf of Mexico and Caribbean, may be better suited for these hotter climates, but quickly gapes in refrigerated storage and will die in several days when removed from water.  The longer shelf life of the northern clam is one reason this species became an aquaculture candidate in the 1950-60s.  Hybridization is a common breeding technique in which offspring may have superior traits than either parental species. Southern quahogs readily hybridize with northern hard clams in the wild where they co-occur (e.g., Indian River) and under hatchery conditions.  Clam hybrid studies conducted by Winston Menzel at Florida State University in the 1960-70s showed hybrids had improved growth; but little data was reported on the merit of hybrids for improved survival.  This project allowed for a rigorous examination of clam hybridization in laboratory and field-based studies to improve clam production and to assure product quality.

Hard clam broodstock were obtained from a Florida hatchery.  Southern quahog broodstock were obtained from the wild (Sarasota Bay), where pure populations are known to exist.  Clams were spawned by thermal stimulation in separate spawning trays.  Single parent crosses were utilized with eggs from each female divided into two containers and inseminated with sperm from either the hard clam or southern quahog. Larval, setting, and post-set rearing was performed using standard hard clam hatchery protocols. Three replicate families (A, B, C) were produced for each clam species and their reciprocal hybrids:

These families were reared under commercial conditions (land-based and field nursery) during 2008 – 2009.  About 248,000 seed were field-planted in the fall (2008) in bottom bags at 1150/bag (72/ft2) for replicated comparison of stocks at a Cedar Key lease site.  In addition, growers planted 190,000 seed on commercial leases in three counties for site comparison.  Harvesting occurred after 12-13 months.  At harvest, parental stocks and their hybrids were evaluated for shell width (SW), shell length (SL), total weight (TW), dry meat weight (MW), condition index, survival, and commercial grades (>1” clams).  A measure of yield (pounds per bag, lbs/bag) was also determined.  Harvested clam stocks were evaluated for shelf life (survival and gaping) in refrigerated storage.  Market acceptance was documented via a consumer acceptance study and characterization of sensory attributes.  Laboratory experiments examined the combined effects of temperature, salinity, and dissolved oxygen on survivorship of these stocks using natural ranges found in Florida.  These challenges were performed to understand what may be happening in the field, but under controlled conditions.

Seed Production: Spawning of both clam species was accomplished by thermal stimulation. Southern quahogs seemed to spawn as water cooled from peak temperature.  It was difficult to have spawns occur concurrently, but spawning usually occurred within one hour of each species. Differences in fertilization between hybrid crosses were sometimes noticed, but were not quantified. Nuclear DNA amounts in larvae, as measured by flow-cytometry using DAPI stain, differed slightly (six fluorescent units) between the parental species, but hybrids sometimes exhibited values of only one parental type.  Allozyme marker analysis indicated that in two of the crosses, at least one parental clam was a hybrid, thus making DNA amounts unsuitable for identifying hybrids.  This genetic analysis reflects the difficulty of using visual characteristics to differentiate between species that naturally hybridize.  Survival among families in land and field nurseries ranged from 73-82% and 73-86%, respectively.  Differences at these stages were not evident. 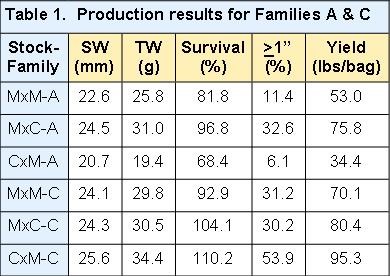 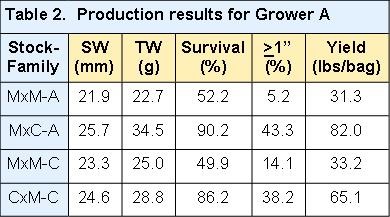 Shelf life: Stocks held in a commercial cooler were assessed every other day over a 10-day period.  At day 8, survival of CxC declined to 39%, while survival of the hybrids and hard clams was >98%.  At day 10, hybrid survival was 88% for MxC and 70% for CxM, while the hard clam (MxM) survival was 99%.  Stocks were also assessed for gaping (open valves or shells) over this period.  At day 6, the number of live CxM hybrids gaping was greater than the hard clam (62% versus 0%), while gaping in the MxC hybrid was 14%.  At day 8, gaping in the MxC hybrid was 47%, while gaping in the hard clam was 13%.  Interestingly, hybrids seemed to resemble the maternal parent in their shelf life responses.  This shelf life trial was initiated during early September when water temperatures at harvest were >85oF.  Performance of hybrids improved in shelf life trials conducted in October and November 2009.

Product Attributes: A consumer acceptance study consisted of a blind taste test of cooked (steamed) hard clams, southern quahogs, and their hybrids.  Responses (n=90) indicated no differences among the stocks in acceptability, flavor, or taste. When participants were forced to rank in order of preference, the MxC hybrid ranked higher than the others.  Sensory attributes for all stocks were also characterized at the UF Aquatic Food Products Lab by a trained panel. Product was characterized by appearance (color, volume of meat, plumpness), aroma, basic taste, flavor, aftertaste, texture, and mouth-feel for both raw and cooked clams.  During cooking, it was observed that the hybrid clams and southern quahogs required less time to open than the hard clams.  Attribute values obtained for the hybrid clams were either similar or intermediate of those values for the parental species.  No significant differences were detected for any of the attribute values when comparing the clam stocks. Thus, wholesalers, retailers, and consumers should not consider hybrid clams to be any different from hard clams or southern quahogs based on their sensory profiles.

Laboratory Challenges: Parental species and their hybrids, representing two families (A and B), were exposed to salinities of 15 or 25 ppt and hypoxic or normoxic dissolved oxygen levels at a constant temperature of 32oC (90oF) for 28 days. Clam stocks were observed for mortality every 24 hours.  The challenge was conducted twice with two sizes of clams -19 mm SL in September 2008 and 35 mm SL in May 2009.  Hybridization had a significant effect on survival of the smaller clams; MxC hybrids were the least sensitive to stressors; whereas the hard clam (MxM) was the most sensitive.  Treatment had a significant effect on survival; survival time was shorter in the lower salinity (14 days in 15 ppt versus 27+ days in 25 ppt), regardless of oxygen level. In addition, one family (A) performed better, overall, than did the other family (B).  For the larger clams, stocks apparently did not have an effect on survival under the laboratory conditions.

Hybridization resulted in improved clam production performance.  Further, genetic background played a role in different family responses. Neither hybrid clam performed poorly when compared to the hard clam, except CxM of Family A, which was similar to CxC.  Although shelf life results for the CxM hybrid were not commercially acceptable, results for the MxC hybrid may be (up to 6-7 days). Laboratory challenges also suggested that the hybrid (MxC) may offer improved stress resistance and genetic background may play a significant role in response to stressors.  Hybrid clams were determined to be functional reproductively as the pure stocks. Therefore, the project team began evaluation of another breeding technique in which hybrids produced in these trials were “backcrossed” with hard clams in an effort to further improve shelf life while maintaining the production advantages seen in the original hybrids.  Alternative processing (freezing) and packaging methods may make the use of hybrids with reduced shelf life capacity more practical; but this must be explored further.

A number of presentations about project results have been made at state, regional, and national meetings. The presentations below can be viewed in PDF format. 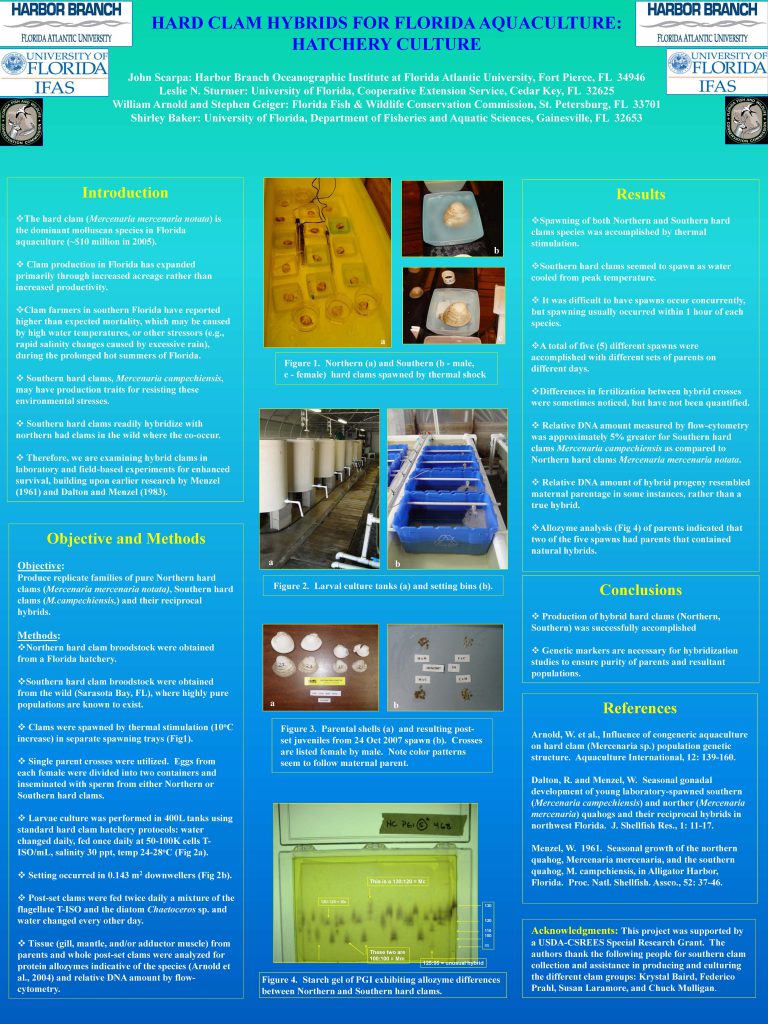 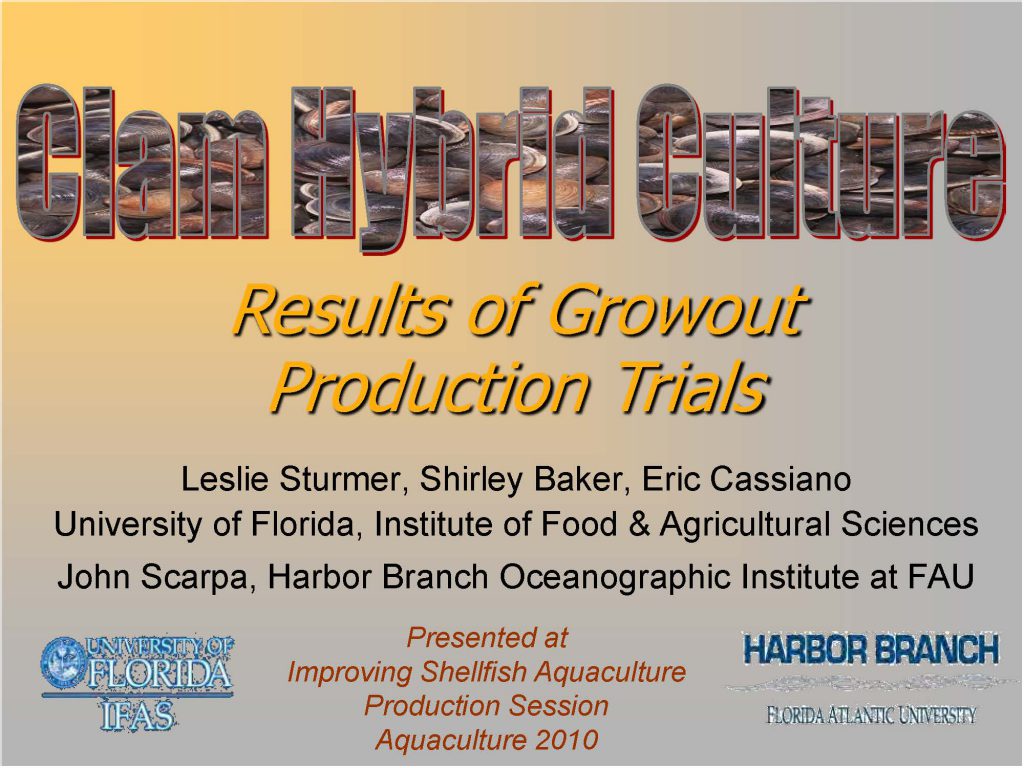 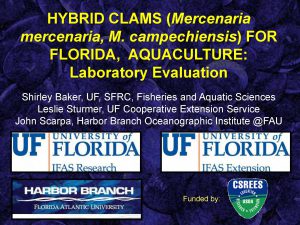