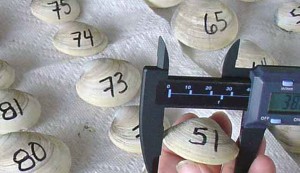 Stressors, such as high temperature, low dissolved oxygen, salinity extremes, and low body mass after spawning, may contribute to high summer mortality and unreliable production of hard clams in the southeast United States, particularly Florida.  Triploid induction is a basic breeding technique.  Triploid organisms have three sets of chromosomes instead of the usual two, which results in reproductive sterility.  Sterile clams may be beneficial as energy normally used for reproduction is diverted to growth and potentially stress resistance.

Seed Production: Triploidy was successfully induced in hard clams; however, success varied (0-100%).  Typical mass spawning techniques were problematic because eggs were pre-fertilized leading to incorrect timing of application of the chemical to induce triploidy, which resulted in low triploid induction or high mortality of clam embryos.  If triploid clams are found to be advantageous for culture in Florida, a reliable technique for producing triploids must be developed.

Physiological Responses: Triploidy may increase survival, but only under certain conditions, such as hypoxia.  Laboratory experiments compared the combined effects of temperature, salinity, and low oxygen on clam survival.  Clams were challenged at 90°F at salinities of 10ppt, 25ppt, and 40ppt, and normal (normoxia) or low (hypoxia) oxygen levels.  At salinity extremes (10 and 40 ppt) triploid clams had no advantage over diploid clams.  However, at 25ppt and hypoxia, diploid clams began to die 3 days sooner than triploids.  After 22 days of exposure, about four times as many diploid clams had died as compared to triploid clams.  Triploidy may confer a metabolic advantage, but only under certain conditions, such as low salinity.  Laboratory experiments were conducted to measure oxygen uptake rates (metabolism) of clams at various water temperatures and salinities.  There was no difference in metabolism between triploid and diploid clams at water temperatures of 68, 77, 81, 86, and 90°F at 25 ppt.  However, at 15 ppt and 81°F, triploid clams had lower metabolism than they did at 25 ppt, while diploid clams did not.  Lower metabolism may allow triploid clams to survive longer than diploids under these stressful conditions. Triploidy did not increase thermo-tolerance of clams.  Laboratory experiments were conducted to asses if thermo-tolerance, as measured by survival and heat-shock protein (Hsp) concentrations in tissue, was increased by triploidy.  Heat-shock proteins were found in the tissues of hard clams under both normal and heat–shock conditions.  Survival in hard clams was higher when initial Hsp concentrations were higher at the time of heat-shock.  Therefore, selection for high Hsp clams may increase thermo-tolerance.

Growout Production: Triploidy did not consistently confer a growth or survival advantage in laboratory or field trials.  Laboratory and field experiments were conducted to determine if triploid clams had better growth and survival.  Two three-week laboratory growth experiments were performed on nursery-seed (~85 and 12 mg). Triploids grew significantly less by the end of both experiments (Exp I: Triploid 250-269% versus Diploid-341%; Exp II: Triploid-422% versus Diploid-549%).  Field growth studies at different sites on the west coast of Florida were interrupted during the severe 2004 hurricane season, with loss of most groups.  In samples taken from one site just after the hurricanes, triploids and diploids were similar in shell length and whole weight.  In samples taken from just one family two months after the hurricanes (~12 months in age), it was found that triploids were smaller in shell length (19.7 versus 23.4 mm) and whole-weight (1.97 versus 3.33 g).  However, triploids had a higher condition index (i.e., ratio of dry meat weight to shell weight, 6.6 versus 5.6).  Histological examination of gonads indicated that 50% of the diploid clams had completed spawning and 40% had no gonad.  In contrast, 100% of the verified triploids had no gonad.  This data indicated that gonad development was inhibited in triploid hard clams as has been seen in other bivalve species.  A new set of triploid clams was produced in late 2005.  At the end of field culture, differences were found between triploids and diploids and between sites.  At Cedar Key, triploids were similar in length (46mm) and weight (30g), but had a higher condition index (5.3 versus 4.8) and lower survival (69 versus 80%) compared to diploids.  At Charlotte Harbor, triploids were similar in length (48-50mm) and condition index (4.6), but lower in weight (34 versus 44 g) and survival (43 versus 49%) compared to diploids.

Economics:  Triploid induction methods modestly increased the cost of producing seed clams.  An economic analysis was performed on the cost of producing triploid nursery-seed (1mm) clams.  The additional cost associated with triploid production in the hatchery was calculated to be $0.14-0.27/1000 seed (~5-10% increase), depending on survival.

Recommendation:  Triploid clams did not consistently produce higher growth or survival as compared to normal diploid clams in laboratory or field experiments.  Therefore, triploid clams are not recommended for all Florida clam farmers.

A presentation on project results made at a state meeting and final report can be viewed below in PDF format.