Over the past two decades, a dramatic increase in aquacultured shellfish production has occurred in Florida. The industry grew from $0.4 million (13 farmers) in 1987 to $185 million (over 300 farmers) in 2007. However, the industry is built on a single species, the hard clam Mercenaria mercenaria. Diversifying the hard clam culture industry by developing farming technology and markets for otherbivalve species would increase economic stabilityand growth. The blood ark Anadara ovalis and ponderous ark Noetia ponderous are native bivalve species found to naturally set and grow in clam bottom bags in Florida.Wild stocks of ark clams have been harvested in North Carolina and Virginia in limited quantities for ethnic markets in the U.S. The development of a major fishery for these species has been limited by a variety of factors, including dispersed wild populations, minimum understanding of clam reproduction, and isolated markets. The culture and market potential of these ark clams was assessed in an effort to introduce new molluscan species to producers and provide a different revenue source to hard clam culture enterprises.

An integrated approach was undertaken to investigate the aquacultural and market potential of two potential commercial bivalve species. The goal was to determine the feasibility of establishing a commercial aquaculture industry for the blood ark and ponderous ark. Specific objectives were to: 1) determine the gametogenic cycles of both arks, 2) develop reliable spawning and larval rearing techniques for seed production of both arks, 3) define and evaluate culture techniques to optimize survival of both ark clams at settlement (metamorphosis), 4) monitor the production performance (survival and growth) of ark clams during the field nursery and growout phases using culture techniques similar to those for hard clams, 5) assess the magnitude of the potential domestic market for both ark clams, and 6) >determine product attributes desired by the seafood trade, including nutritional analyses and shelf life in refrigerated storage.

Seed and Growout Production: The annual reproductive pattern of the blood ark and ponderous ark off the east (Atlantic) and west (Gulf of Mexico) coasts of Florida, respectively, was histologically determined.In both arks, the sexes were separate, with a low incidence of hermaphrodites observed in the blood ark. Arks of both species were found to dribble spawn over most of the year, with peaks in gonadal development occurring during the late spring-early summer months for the blood ark and during the summer and fall months for the ponderous ark. Typical spawning techniques used in hard clam hatcheries were successful when applied to ripe ark clams and early developmental events of both were congruent with that of the hard clam. Differences were found in the larval rearing period with time from fertilization to setting varying from 16 to 21 days in the blood ark and from 21 to 28 days in the ponderous ark. Setting was problematic in that no visual cues were apparent to determine competency. Further, metamorphic induction experiments conducted to evaluate physical substrates and chemical cues on settlement were not successful. Rather, size determined when to transfer larvae to downwellers; setting percentages were low. Post-set ark clams were reared using similar systems and methods as hard clams. Nursed in land-based wellers, blood arks increased from 1 mm in shell length to 13 mm in 60 days, whereas ponderous arks reached 16 mm in 142 days. Field-planted in polyethylene (hard) and polyester (soft) bottom bags, juvenile blood and ponderous arks reached market size (35-40 mm shell length, 25 mm shell width) in 9 and 12 months, respectively. Following post-set, mortality was negligible with survival exceeding 80% in soft bags and 90% in hard bags.

Marketing: A nationwide survey of certified shellfish dealers was conducted to determine the current state of the market and sales for cultured ark clams. Survey responses and product evaluations revealed that markets were very limited in the U.S., and both arks had limited appeal to traditional clam customers. There was a widespread lack of familiarity with these species, and very few dealers were currently selling them. It is unlikely there will be a “mainstream” demand for ark clams in the U.S. Despite these findings, market development proponents recognized the importance of ethnic markets in target locations on both the East and West coasts. Targeting seafood dealers in those areas with large Asian and Hispanic populations could result in profitable niche markets. Product attributes, nutritional analyses, and shelf life in refrigerated storage were also determined for both ark clams. 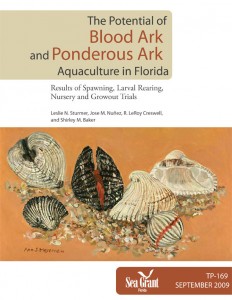 A number of presentations about project results have been made at state, regional, and national meetings. The presentation and report below can be viewed in PDF format.