The goal of this project was to develop a formal, science-based sensory profile to characterize aquacultured hard clams Mercenaria mercenaria by establishing standards to rate and describe the unique attributes of raw clams. The sensory characterization program can be used by investigators assessing product quality and shelf life, or commercial interests trying to distinguish products by location, season, or process. Popular use could lead to local product distinctions or appellations that stimulate and attract consumer interests. The non-biased tool can also be used to help direct commercial practices and decisions for marketing and maintaining product standards based on sensory attributes.

The seafood sensory panel at the University of Florida (UF), Food Science and Human Nutrition Department was used to conduct the evaluations. Panelists were trained with cultured hard clam samples from the same harvest area in Cedar Key, Florida, using a descriptive sensory analysis. During an orientation phase, the necessary lexicons, descriptive standards, and scoring metrics for rating hard clam products were developed. The approach involved multiple sessions to account for anticipated variables due to harvest time, environmental and weather conditions at harvest (e.g., salinity), and storage times. After the profiling format was established, the trained panel assessed hard clam samples from commercial farms located in Massachusetts and Florida during 2008 – 2009. The intent was to characterize the appearance and edible features of raw hard clams cultured from various locations and to distinguish attributes for various growing areas or farming operations.

Sensory Standards and Ratings: The necessary product descriptors (lexicons), reference standards, and intensity scales (ratings) were developed for a complete product characterization. Rating standards and scales for hard clams were derived from profiling differences and unique attributes for seven sensory attributes – appearance, aroma, basic taste, flavor, aftertaste, texture, and mouth-feel. The sensory standards included actual items and mixtures that could be prepared and used to represent particular appearances or sensations for raw hard clams. For each attribute, several product descriptors or lexicons were defined. Lexicons for appearance included color of meat and shell, volume of meat, and plumpness; aroma included briny and seaweed, earthy, and metallic; basic taste included salty, umami, sour, and bitter; flavor included seaweed, chicken liver-like, and earthy; aftertaste included metallic and astringency; texture included firmness and chewiness; and, mouth-feel was based on the detection of grit. The lexicons for each attribute were rated on a 10-point intensity scale where a value of 5 indicated a medium or average value.

Characterization of Hard Clams from Massachusetts to Florida: The average and range of attribute ratings for raw hard clams harvested from farms located in Massachusetts to Florida were determined. Shell color ratings were reported with outer shell color among harvest locations the least variable, ranging from common gray-tones to more browns and some orange coloration associated with the Florida hard clams. The edible meat color was more variable per location than shell color. The edible meat volume (fill in the half-shell) and plumpness could be used to distinguish products as they were the more obvious and variable ratings for appearance. In terms of taste, ratings for “salty” were by far the most distinguishing attribute. This result was expected and remained consistent with commercial experiences. The salty taste mau not necessarily distinguish growing areas, but could reflect seasons or local environmental conditions. There was an interesting range in ratings for umami taste, which has not been previously described for hard clams. Umami, which is a Japanese term for “pleasant, savory taste,” could be an attractive term to market clams. It is an accepted basic taste used by the oyster industry to promote raw, half-shell product. The high ratings for salty masked the flavor attributes. As expected, the average texture ratings of the clams were characteristically firm and somewhat chewy. Presence of sand or grit in clams resulted in an unpleasant and negative mouth-feel; some samples rated high in grit. The rating results of attributes averaged for each state were compared to the overall average of samples from all harvest locations. These results reflected the period of harvest rather than an expected value for each location since the changes in growing conditions (e.g., salinity, phytoplankton composition and abundance) can change attributes for clams harvested from the same location.

A professional tasting of cultured raw clams from the states that participated in the sensory characterization was conducted in conjunction with a culinary event held in Savannah, Georgia and hosted by the East Coast Shellfish Growers Association (ECSGA). More than 100 shellfish aficionados, who attended Romancing the Clam, tasted clams and received a product evaluation form to complete. They were able to compare their results with those of the UF trained sensory panel. Each participating state was provided with a distinctive award based on the results of their clams’ sensory profile. A video and photographs of the event were made available to seafood wholesalers and distributors and are posted on the ECSGA’s website, Facebook, and YouTube. 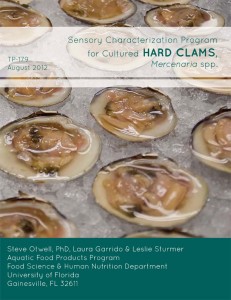 A number of presentations about project results have been made at state, regional, and national meetings. The presentation and final report below can be viewed in PDF format.