Sudden salinity drops in clam growing areas in Florida have been suggested as a cause of seed (juvenile) clam mortality.  Water quality data collected continuously for the past couple of years at a high-density lease area in Levy County, Florida reveal that short-term salinity fluctuations are greater than suspected.   From June 2000 through July 2001, an average 24-hour range in recorded salinity values at the Gulf Jackson lease area was 5 parts per thousand (ppt).  However, maximum 24-hour changes were as high as 24 ppt.

Trial I: The short-term impacts of strong but gradual salinity declines of several different magnitudes were examined.  Clams, average shell length of 6 mm, were exposed to a salinity drop of 5 parts per thousand (ppt), 15 ppt, or 24 ppt, over a span of 24 hours, and the duration of this exposure was either 3 or 6 days.  Seed clams proved resistant to all salinity drops except for the largest drop (28 ppt to 4 ppt) for the longest duration (six days).  Condition index declined significantly under these conditions, and observed mortality at the end of 6 days was 17%.  In all other salinity drops in this trial, condition index of clams did not change from initial levels and mortality was not different from controls (0-2%). 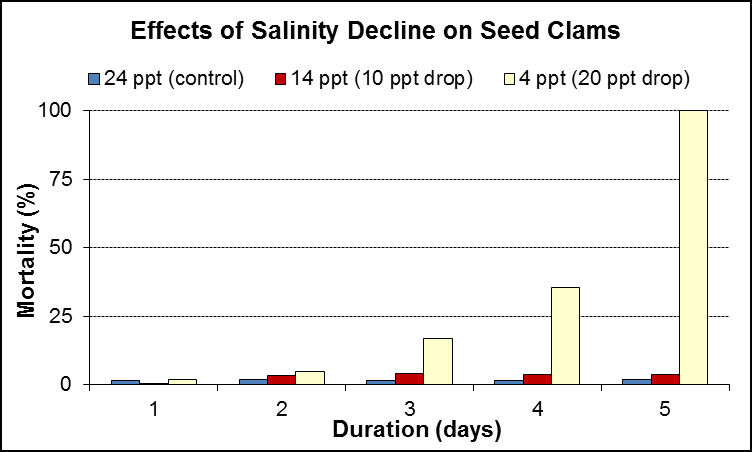 Trial II: The effect of immediate salinity declines, also of several magnitudes, under two typical commercial handling regimes was examined. Treatments included a non-change control and two immediate salinity drops of either 10 or 20 ppt, resulting in test salinities of 24 ppt, 14 ppt, and 4 ppt, respectively.  Seed clams were either immediately immersed or dry-stored for 24 hours prior to immersion, representing common handling activities by clam growers. The duration of exposure was 8 days.  Results of Trial II are illustrated in the figure.  Seed clams experienced 100% mortality at the 20 ppt drop (from 24 ppt to 4 ppt) after 8 days of exposure, but mortality in the 10 ppt drop treatment was low and did not differ from the control (0 ppt drop).  Dry storage did not significantly affect mortality in any treatment, and no significant differences in condition index were observed in any salinity treatments.

Summary: Clam seed were surprisingly hardy to short-term salinity declines.  Nonetheless, salinity changes of the magnitude sometimes observed at lease areas resulted in mortality in both trials.  In the first trial, with a step-wise salinity decline, mortality was delayed for about 6 days, compared to only 2 days in the second trial. Short-term salinity drops of these magnitudes appear to occur on an annual basis at the Gulf Jackson lease area.  Differences between trials may also be due to differences in ambient water temperatures. Trial I was over 5oF cooler, with potentially reduced metabolic rate of clams.

Long-term effects of salinity declines remain to be tested.  Salinity drops may have sublethal effects, measured in reduced growth rate.  Further, salinity drops may have a chronic impact on clam survival, causing increased mortality over a period longer than examined in this study, or by causing clam resistance to other environmental parameters.  Thus, if salinity drops do account for short-term commercial clam seed mortalities, effects may be compounded or moderated by other factors, such as sudden temperature shifts, low oxygen events, pathogens, or handling effects.

A final report can be viewed below in PDF format.