Soils are the uppermost portion of the Earth that support all plant and animal life.  Soil properties vary over space and time across many scales. Accounting for this variability is crucial to understanding the interactions between soils and the life they sustain.  In clam aquaculture, this is especially true as clams spend a considerable portion of their life cycle buried in the soil. Soil physical and chemical properties likely have an effect on clamming and vice versa.  Understanding these relationships is crucial to maximizing clam production.  Sediment characteristics, such as sediment type, particle size distribution, and soil permeability, seem important for clam growth.  In general, clams tend to grow better in sandy sediments relative to muddy sediments.  Negative relationships have been found between silt and clay fractions with clam growth.  It also has been suggested that mud content was positively related to production rate of pseudofeces (rejected particulate matter released as mucous-coated balls) by clams; thus, it is reasonable to suggest that with time, the deposition of pseudofeces contributes to an increasingly muddier substrate.  Although sediment affects growth, its signature may not always be strong, as effects of sediment characteristics can be confounded by other environmental variables, such as wave currents.  Soil organic matter is another important soil characteristic, as it provides an energy source for many of the biogeochemical transformations that can happen in estuarine environments.  Organic matter decomposition byproducts can include hydrogen sulfide (a colorless, toxic gas which smells like “rotten eggs”), which may also affect the survival and growth of bivalve species.

The objective of this project was to conduct an initial land assessment of high-use and unused clam lease areas using a soils-based approach. This would also provide an initial assessment of soil and clamming relationships.  Supporting this objective were several tasks: 1) create a digital terrain model of the study area, 2) sample soils to capture variability within and between leased and unleased areas, and 3) analyze samples for bulk soil characteristics to establish relationships between soil characteristics and clam productivity. 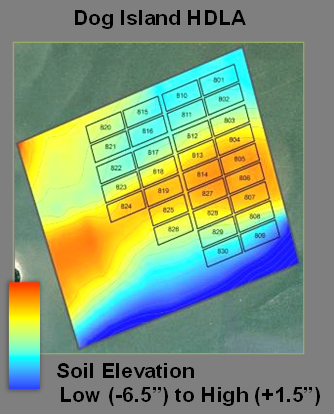 Bathymetry (measurement of water depth) and soil were sampled throughout the Dog Island High-density Lease Area, located east of Cedar Key, Florida.  Soils were analyzed for organic matter, particle size distribution, and bulk density.  These variables were selected because they control the physical and chemical behavior of the soils in which the clams live.  All soil and bathymetry data were positional recorded using GPS and formatted using GIS.  This resulted in a series of spatial maps of soil properties.  For example, the water depth throughout the lease area and surrounding waters is shown. In addition, maps were created that depict soil clay content and soil organic matter.  Relationships between soil properties were evident.  These patterns may help explain biogeochemical differences throughout the clam lease area.

A presentation on project results was made at an industry meeting. The presentation, which consists of soil maps, can be viewed below in PDF format.