Nursery and Growout Culture of the Sunray Venus Clam

Land-based Nursery: Replicated nursery trials were conducted using downwellers to evaluate stocking densities and methods. In two trials, densities of 1,000 to 4,000/ft² of bottom area were evaluated. High mortalities were noted in the first trial after several weeks. Survival in the second trial ranged from 66 to 69%, but growth was minimal after 11 weeks. In the next trial, seed (>1.2 mm sieve; 294/ml; 3.5 mm shell length, SL) were stocked at densities from 1,000 to 2,500 per ft² in trays placed inside tanks in which water was distributed via laminar flow. After 7-8 weeks, no differences were found among the densities in terms of survival (87-91%) or growth (70-79% sieved on a 4.0 mm screen, 8-9 mm SL). Another replicated trial using the same methods resulted in 87% survival after 10 weeks with over 65% of the seed sieved on a 3.3.mm screen or larger. Modifications evaluated during the land-based nursery culture phase (e.g., water delivery, systems, stocking densities) resulted in achieving commercially acceptable production of sunray venus seed.

Field Nursery and Growout: Production performance of sunray venus clams under field nursery and growout conditions was examined at two commercial clam lease areas in two counties (Franklin, Levy). Seed (6-14 mm SL) planted at densities of 310 to 575/ft², were nursed in bottom bags (4 mm mesh) for 78 to 113 days. Results were variable. In one trial, high mortalities were noted as rain from a tropical storm dropped salinities below 20 ppt after planting. In other trials, survival ranged from 17 to 81% and final seed size from 19 to 24 mm SL. Sunray venus juveniles were further cultured in bottom bags (9 mm mesh) and bags modified with internal PVC pipe frames (1” and 1½”) at densities of 44/ft². After 12 months, no significant differences among bag types for survival (65-76%) or growth (56-59 mm SL, 22 mm shell width, 27-29 grams weight) were found. However, 19-22% of the sunray venus harvested from bottom bags were deformed; whereas only 1-4% of those harvested from bags with frames were deformed. Shell irregularities were limited to the ventral margin with valves having excessive curvature sometimes resulting in a depression. Stocking densities of 38-70/ft² in bottom bags were evaluated at both sites with juveniles (24-27 mm SL). At one location, sunray venus reached 48-56 mm SL with survivals of 38-66% after 13 months. At the other location, sunray venus reached 50-55 mm SL with survivals of 67-74% after 12 months. Bottom plants, in which seed were broadcasted directly onto the substrate and covered with protective netting, were also evaluated. Preliminary results indicated faster growth (63 mm SL) in 12-15 months and less shell deformities when compared to other culture methods, but survival (33-53%) was not improved. In summary, nursery and growout culture methods for sunray venus clams was found not be prohibitive. Sunray venus clams were cultured using methods similar to those used for hard clams; however, production results were site-specific and variable. At one lease site, commercially acceptable survival and growth rates were obtained. Although these production trials appeared promising, shell deformities, which may be gear and/or substrate-related, were observed. Further, sunray venus did not consistently perform well in bottom bags. Where the bag worked, aqueous soils were sandy but not hard-packed. These results provided guidelines for future efforts of researchers and shellfish growers.

Seed Salinity Preference: The salinity tolerance of nursery seed was examined by exposing juveniles (5 mm length, 19 mg whole weight) to salinities of 10, 20, 30 or 40 ppt in triplicate 4 liter beakers. All clams in the 10 ppt treatment died during the first week. After three weeks, survival at 30 ppt (81%) was significantly greater than at 40 ppt (55%), but not at 20 ppt (69%). Survival was not significantly different between 40 ppt and 20 ppt. Growth (% weight change) for surviving sunray venus clams was significantly affected by salinity. After three weeks, seed at 30 ppt grew significantly more (270%) than those at 40 ppt (208%), which grew significantly more than those at 20 ppt (125%). From this experiment, salinity tolerance for sunray venus clam seed is between 20 and 40 ppt, with an optimum near 30 ppt, which is similar for hard clams.

Shelf Life and Purging: To determine the survival of sunray venus clams (7/8-1” grade) under typical commercial refrigeration, evaluation of shelf life was initiated. In winter trials, survival was 90-100% after 14 days with no gaping of sunray venus observed. In summer months, shelf life was reduced as survivals of 88-95% were reached after 9 days and gaping was observed (21-31%). These preliminary results are similar to those obtained for cultured hard clams in refrigerated storage (<45oF). To evaluate the efficacy of purging sunray venus clams to reduce the presence of a “grit pocket” (renal calculis found near the kidney), market-size product (average: 58 mm length, 31 g weight) was placed in tanks with running saltwater for 7 days post-harvest. The grit pocket size did not diminish over time; however, the average grit pocket weight amounted to only 3% of the sunray venus meat weight.

Consumer Acceptance of Raw Product: About 1,200 cultured sunray venus (average: 67 mm SL, 42 grams [10/lb] total weight) were delivered to four sushi restaurants in the north Florida region. Sunray venus were served raw in the traditional sushi and sashimi manners or prepared other ways. Within those restaurants, 101 patrons completed surveys. Most respondents were only slightly hesitant to try raw sunray venus clams. Nineteen percent of the respondents detected grittiness in the clams. For all respondents, 83% were willing to order the product again and 91% were willing to recommend the product. The acceptance rate was lower in traditional Asian sushi restaurants with 63% willing to order again and 64% willing to recommend. The survey findings suggested that sunray venus clams, prepared as a raw product, would be acceptable. The survey did find that Asian consumers were more willing to rate product attributes either good, fair, or poor; although non-Asian consumers rated the product as either excellent or very good.

For more information about this project, view the final report below, as well as presentations made at state, regional, and national meetings. 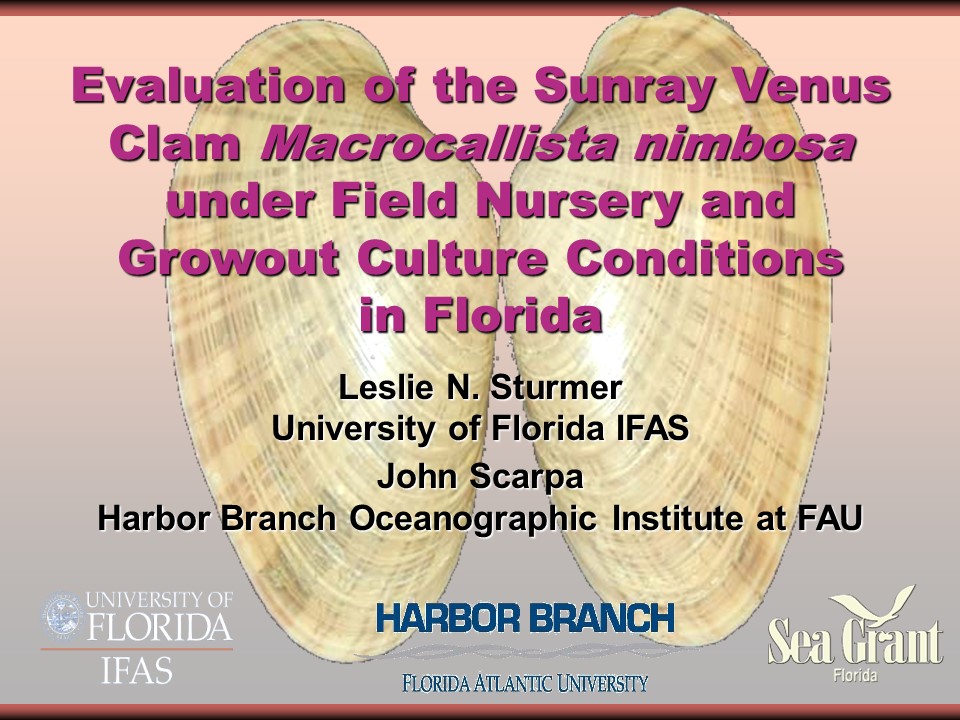 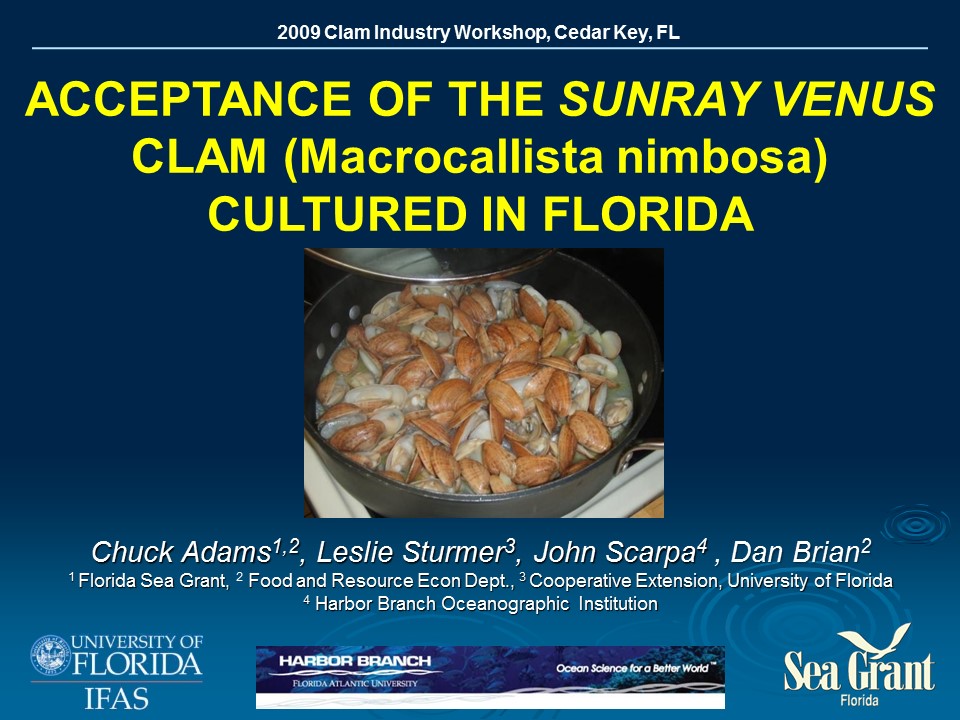