Characterize bottom sediments to determine compatibility of leases for culture 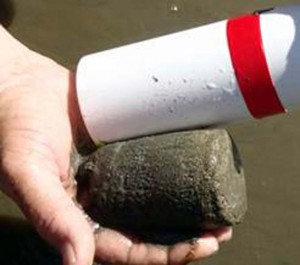 The relationship between subaqueous soils (bottom sediments) and sunray venus clam productivity was examined in a prior Florida Sea Grant project. Soil properties were analyzed at 18 existing leases on the west coast of Florida where test plots of sunray venus clams were planted. Survivals of greater than 50% were achieved at leases with sand content ranging from 88 to 98% and organic matter content ranging from 0.2-1.3%. In controlled replicated studies conducted at the UF experimental lease near Cedar Key, findings suggested that soils with greater sand content (>90%) were favorable for sunray venus clam culture. This information will now be used as a tool in this project objective to aid growers in determining compatibility of soils at their farms or future lease sites for sunray venus clam culture. The soils-based approach is similar to how the USDA National Resources and Conservation Service uses soil properties to survey lands best suited for various types of terrestrial crops. Soil test kits have been assembled for clam growers to collect samples for analysis of soil properties. The kit consists of the following materials: soil corer made of PVC pipe and caps, sample bags, and pre-paid shipping box. An information fact sheet informs growers on how and where to sample the soils on their lease. Samples along with a soil test form are mailed to the UF IFAS Shellfish Aquaculture Extension Office. Each sample will be analyzed for particle size distribution (sand, silt, clay) and organic matter content by Dr. Todd Osborne at the UF Wetland Biogeochemistry Lab. A report will be provided to the grower with soil results and information on how they relate to suitability of sunray venus clam culture. Growers interested in this free service must send soil samples for analysis prior to August 1, 2016.