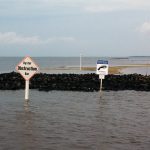 Offshore oyster reefs along the Big Bend coast of Florida have declined by 88% during the last 30 years, with the most likely mechanism being repeated die-offs due to predation and disease during high salinity periods, driven by episodic and increasing periods of reduced freshwater input to estuaries. These die-off events have led to a conversion from shell to sandbar substrate and rapid loss of elevation (about 3 inches per year). This process appears to be nonreversible, because oyster spat are unable to colonize sandy substrate. A pilot project conducted by University of Florida researchers and funded by grants from