During the first year of Project VENUS (Vocational Education Network Using Sunrays), over 65% of the hatcheries in the state received broodstock and a small stipend to assist them in producing sunray venus clam seed. Excessive rainfall over the past winter and spring resulted in lower salinities and may have affected seed production. 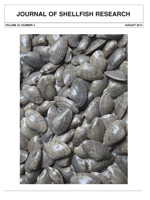 Over the past seven years, the culture and market potential of the sunray venus clam has been examined. The existence of a latent market and potential growth rate of this native bivalve made it a logical choice to diversify the Florida hard clam industry. To increase awareness of this new culture species, sunray venus clams […]

The growth of the Florida shellfish culture industry is a dramatic success story. However, the industry is built on a single clam species—the hard clam. Development of alternative culture species and farming technology represents an important gain over the present reliance on a single species crop. During the past seven years, researchers at UF IFAS […]