In Florida, hard clams are grown in polyester mesh bags on open-water leases in coastal waters. During this phase of production (12-18 months), bottom bags are subjected to natural conditions, including biofouling. Biofouling can compete with clams for resources (food, oxygen), impede harvesting efforts, and intensify equipment upkeep. Some clam growers treat bags with an alkyd-based coating that stiffens the material to reduce predation from cownose rays. However, no coating is currently being used to address biofouling.

The objectives of this study were to evaluate the performance of two fouling release net coatings deployed on nearshore shellfish lease areas over three- and six-month time periods and compare them with the standard alkyd-based net coating used by industry as well as an uncoated netting. Four treatments were evaluated in the field study: Thirty-six treated net pieces (12 inches x 12 inches, n=6) and six untreated pieces were attached to PVC racks (n=3) and deployed for three or six months on two shellfish aquaculture lease areas near Cedar Key, Florida. Upon recovery, each net piece was photographed and weighed. Individual pieces were agitated in seawater; released fouling was weighed. Net pieces and their released fouling were preserved in 10% buffered formalin for species identification. To determine total wet weight (TWW) of biofouling, the weight of net pieces prior to deployment was compared to the final wet weights. Fouling released was expressed as a percent [PFR = (wet weight of fouling released / TWW) * 100]. Photographs of net samples after three months deployment were analyzed for biofouling coverage using Coral Point Count software; 200 random points were assigned to each net piece. A point count code was developed for analysis of photos based on two groups: Not Fouled (NF) and Fouled (F). Subgroups within the fouled group were: Tunicates (TC), Detritus/Mud (D/M), and Other (O), such as barnacles, sponges, and cnidarians. The dominant groups were verified by inspection of preserved net pieces. To determine significant differences between treatments (p<0.05), ANOVAs and Tukey HSD tests were performed. Percentage data were arcsin square root transformed prior to analysis. 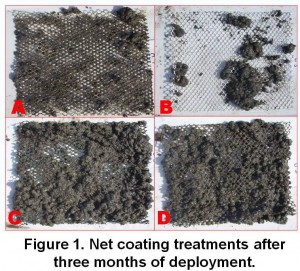 Net coating treatments (A, B, C, D) can be viewed after three months of deployment on a shellfish aquaculture lease (Figure 1). At three months, A and B (all net colors) had significantly less total wet weight (TWW) of biofouling than C (both colors) and D. Treatment B-Wht had less TWW than C-Grn and D. No treatments differed in percent fouling released (PFR) after agitation. At six months, treatments B-Blk and B-Wht had less TWW than A, C, and D. Treatment B-Red had less TWW than A and C (both colors). Treatment B-Blk had greater PFR than D. The average biofouling coverage of net coating treatments deployed for three months is illustrated in Figure 2. Coverage was defined as Not Fouled (NF), Tunicates (TC), and Detritus/Mud (D/M). The category Other (O) was not represented graphically due to low occurrence. Treatment B (all colors) had significantly more “not fouled” points than other treatments. Treatment A had less points fouled with TC than C and D, and more points fouled with D/M than others. In summary, biofouling is a major impediment in all areas of extensive aquaculture, including shellfish farming. By reducing biofouling, we can improve equipment maintenance, reduce harvest labor, and may enhance stock performance. In this study, the advantages of two non-toxic, fouling release coatings were demonstrated. When compared to the industry standard coating (C) and untreated netting (D), Treatment A had variable performance with less total wet weight of biofouling at the three-month duration, but similar total wet weight of biofouling at the six-month duration. Treatment A also had similar biofouling coverage at the three-month duration.

Upon further examination, we saw that Treatment A had significantly less tunicates (TC) but significantly more detritus/mud (D/M), likely accounting for the lower wet weight but similar biofouling coverage. Conversely, Treatment B performed well in terms of both total wet weight of biofouling organisms and biofouling coverage for both durations when compared to C and D. Although net color was examined, no significant trends were detected. No differences in percent fouling released through agitation may be attributed to methodology; an increase in replication coupled with a standardized technique may help identify fouling release advantages of the experimental net coatings. The performance of both fouling release coatings was encouraging and warrants future research of their application in shellfish aquaculture. Presentations (poster) on project results were made at state and national meetings and can be viewed below in PDF format.