Oyster farming, like any aquaculture or agriculture operation, has risks that are beyond the grower’s control. Normal risk is related to occurrences, such as inclement weather, predation, fouling, or other variables, that typically can occur during production. Oyster mortality and costs associated with normal risk are factored into the farm’s potential profitability and generally are considered acceptable at a certain level. Environmental risk in oyster farming can include events such as hurricanes, major storms, or extreme changes in water quality, particularly salinity due to drought or excessive rainfall. As environmental risk increases, potential impacts include increases in oyster mortality, labor time, and repair or loss of gear and equipment. Economic risk is associated with factors that directly affect the farmer’s revenue, such as varying market prices, changes in input costs, and policy adjustments. For example, if market prices decrease or gear costs increase, effects on revenue and profitability may be realized. The financial characteristics of off-bottom oyster culture along the west coast of Florida were documented  in order to assess the impacts of these risks. Estimates of oyster production and profitability for a range of environmental and economic risk conditions were generated.

To understand the risks associated with oyster aquaculture, a University of Florida graduate student in the Food and Resource Economics Department collected information on the costs of operating an oyster farm. Ten farmers were provided with logbooks to document time (labor) associated with culture activities, such as planting, fouling control, transferring bags, culling/sorting, and harvesting. Operational (seed, labor) and capital (culture gear, boat and motor) costs were developed for a hypothetical farm. In addition, three farmers were interviewed to provide estimates of the effects various risks may have on their businesses, including potential increases in oyster mortality and operational and capital costs.

Using this information, an oyster farm budget model was simulated over a five-year planning horizon incorporating major storms, high salinity under drought conditions, low salinity under flood conditions, and changes in market price. The following assumptions were made pertaining to the farming operation. In year one, it was assumed the farm was new with 10,000 oyster seed planted. Each year the number of seed planted increased reaching 250,000 in year five. Triploid seed (6 mm in shell length) were purchased at a cost of $25 per 1000. Vexar culture bags in three mesh sizes (4, 9, 14 mm) were used in growout; off-bottom culture methods included floating bags and cages. The average growing (culture) unit cost was estimated at $33 for the bag, floats, zip ties, PVC pipe, rope, and clips. Based on growers’ input, an average survival of 80% from plant to harvest was used; of those, 90% of the oysters were marketable. The model also included the purchase of a boat and motor at a cost of $32,000 over a 10-year loan at 7% interest. In year 1, it was assumed that part-time labor was not needed by the owner/operator. As oyster plantings increased annually, labor at an average hourly wage of $12 increased from 9 hours in year 2 to 126 hours in year 5.

Long-term databases available from federal and state agencies were used to predict environmental risks for oyster growing areas on the west coast of Florida. The probability of a major storm affecting an area was determined by reviewing historical data from 1900 to the present from the National Oceanic and Atmospheric Association’s (NOAA) interactive database (https://coast.noaa.gov/hurricanes/), which provides the name of the tropical storm or hurricane, direction traveled, wind speed, and date of landfall. Monthly salinity data since the 1980s was obtained for water quality stations located adjacent to oyster farms monitored by the Florida Department of Agriculture and Consumer Services (FDACS), Shellfish Environmental Assessment Section. Historical market prices of cultured oysters were not available for Florida, so prices collected by the Virginia Institute of Marine Sciences (VIMS) from 2005 to 2016 for Virginia oysters were used as a proxy.

The environmental and economic data were analyzed under six risk scenarios to generate financial predictions for oyster growing areas in Alligator Harbor (Franklin County), Cedar Key (Levy County), Oyster Bay (Wakulla County), and Pensacola Bay (Escambia County). In Alligator Harbor and Cedar Key, farms are also suitable for culturing hard clams. Thus, start-up costs, such as surveying and marking the lease, were not applied in the financial models for these two areas. Further, a partial budgeting model for boat and fuel costs was used assuming that some of the costs were associated with the clam operation. Risks were independently observed within each scenario except scenario six, which considered all environmental and economic risks. For the purposes of this assessment, risks were based on events that occurred from 2015 to 2017. Simetar, a Microsoft Excel add-on for risk assessment forecasting and modeling, was used to simulate profitability predictions for each scenario and growing location. The program randomly selected a value from each potential impact for each risk scenario 1,000 times by county. This provided a distribution of profitability estimates on an annual basis for a five-year period.

Scenario 1: Baseline In the baseline scenario, no abnormal environmental or economic risks were applied, just the normal risk that may typically occur in an oyster farm operation. The expected net returns to the owner/operator prior to taxes at the end of year 5 are presented in Table 1 for four counties. In these results, the expected value is the average of all the simulated net income values derived from each risk distribution. A range of net returns that would be expected 50% of the time, based on the 25th and 75th percentile values, is also provided. There are no differences between the two growing areas located in Alligator Harbor (Franklin County) and Cedar Key (Levy County) as the farming operations sustain the same normal risk, and partial budgeting was applied to these farms. The expected net return for farms in these two counties was estimated at $66,180 with a range (50%) of $62,550 to $69,850 after five years of operation. The growing areas in Oyster Bay (Wakulla County) and Pensacola Bay (Escambia County) have the same return of $62,570, which is lower than the other two counties as clam farming was not considered in these counties.

Scenario 2: Hurricanes/Tropical storms Both Alligator Harbor and Cedar Key have the highest probability (19%) of a Category 1 hurricane or tropical storm heading north or northwest impacting the growing area on an annual basis. This additional risk lowers the expected net return by the end of five years to around $62,140 (Table 1). The higher probability of a storm striking an oyster farm affects labor time and costs due to preparation time, clean-up, and repairs, as well as potential increased oyster mortalities. The probability of one of these storms striking Oyster Bay or Pensacola Bay is reduced to 16% and 11%, respectively. However, Oyster Bay (Wakulla County) has the highest probability (3%) of two major storms striking within a year. The expected net return for farms located in Oyster Bay is reduced to $59,019 at the end of five years, which incorporates the additional risk from multiple storms affecting an oyster farm in a given year.

Scenario 3: Low Salinities The highest probability of a low salinity event occurring in which levels fall below 10 ppt for two consecutive months was determined to be 50% for Pensacola Bay at any given year. During this study, an actual event did occur at an oyster farm in Escambia County with resulting mortalities. This risk probability resulted in the expected net value by year 5 to decrease to $55,650 with a range of values of $54,320 to $65,130 occurring 50% of the time (Table 1). However, 2% of the time it is possible that the farm operation could lose money in year five due to this risk. In Wakulla County, there was an 11% probability of a low salinity event occurring in a production year, which, again, would reduce the expected net value to $61,210 in year five.  Probabilities at the other oyster growing locations (Alligator Harbor and Cedar Key) for a low salinity event to occur were zero.

Scenario 4: High Salinities The highest probability (30%) of high salinities affecting oyster crops was found to be in Alligator Harbor (Franklin County), which decreased the expected net value to $61,530, a loss of about $5,000 in revenue from the baseline scenario (Table 1). Probabilities of a high salinity event occurring at the other growing locations were less than 1%.

Scenario 5: Market Prices This scenario does not include environmental risk, only normal and market risk based on variation of prices from projected increases over a five-year period. Dollar values are expressed in real 2017 amounts, not accounting for inflation. The average market price at the end of year five was projected to be $0.48. This creates an expected net return of $66,170 for farms located in Alligator Harbor and Cedar Key, and $62,560 for farms located in Oyster Bay and Pensacola Bay (Table 1).

Scenario 6: All Risks This is the most realistic scenario as it considers all risks identified in the previous scenarios. For each county, a fan graph is used to illustrate the expected annual net returns to the owner/operator over a five-year period (2018-2022) with probability levels  of 5, 25, 75, and 95 percentiles, or percentages (Figure 1). To better understand these graphs, let’s examine Figure 1a which provides potential net incomes for Alligator Harbor growers in Franklin County. Given all risks, the expected net return at the end of year 5 is $58,185, which is designated by the black line. There is a 50% probability of earning an income between $51,130 (blue line, 25%) and $68,340 (orange line, 75%). However, there is a 5% probability that net returns could exceed $77,650 (green line, 95%) or fall below $29,370 (red line, 5%). Other ways to interpret this fan graph is that 75% of the time the net income will fall below $68,340 in year 5, designated by the orange line, or that 25% of the time the net income will fall below $51,130, designated by the blue line. The expected net return of $62,050 in year 5 for farms in Cedar Key (Levy County) is higher than Franklin County (Figure 1b). The higher return is based on a lower probability of all risks affecting farms in that county (23%) compared to Franklin County (51%). The highest probability of all risks affecting oyster farms occurred in Escambia County (61%), which resulted in an expected net return of $53,270 in year 5 (Figure1c). This is a difference of about $10,000 in revenue from the county’s baseline (no abnormal risks) projection in year 5. The average net return in year 5 for farms in Wakulla County was $57,530 based on a 32% probability that  all risks could affect farms in that county (Figure 1d).

Overall, oyster farms in Levy County have the greatest expected net income each year, followed by farms in Franklin, Wakulla, and Escambia Counties. All counties have a 100% probability of a negative net income at the end of Year 1 as revenue does not exceed start-up costs. However, there is a greater than 97% chance of farms in all counties being profitable at the end of year 5 when all risk variables are considered. A financial tool will be developed using these findings, which will allow growers to generate predictive costs and revenues for their farms and investment situation. To learn more about this risk assessment, view the presentation here.

Table 1. Potential net incomes to the owner/operator at the end of a five-year period for baseline, environmental, and economic risks associated with off-bottom oyster farms located in four counties on the west coast of Florida. The expected value is the average of all the simulated net income values derived from each risk distribution. A range of net returns that would be expected 50% of the time, based on the 25th and 75th percentile values, is also presented. 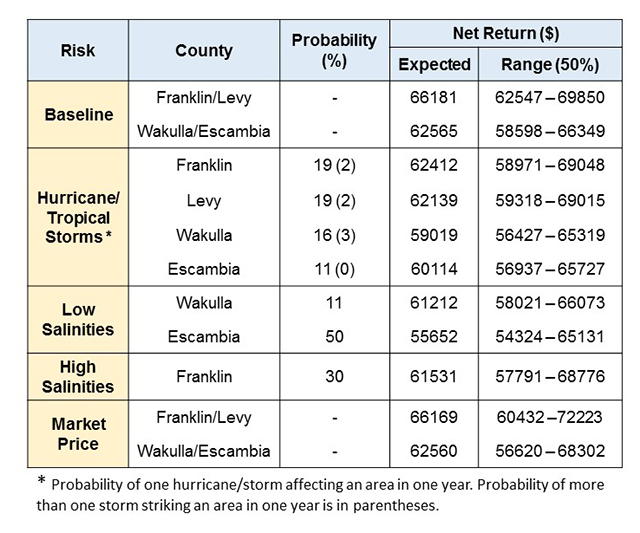 Figure 1. Potential net incomes to the owner/operator over a five-year period given all risks (baseline, environmental, economic) for off-bottom oyster farms located in a) Alligator Harbor, Franklin County, b) Cedar Key, Levy County, c) Pensacola Bay, Escambia County, and d) Oyster Bay, Wakulla County. The expected value is the average of all the simulated net income values derived from each risk distribution.  Net returns that would be expected at probability levels of 5, 25, 75, and 95 percentiles (or percentages) are also presented. 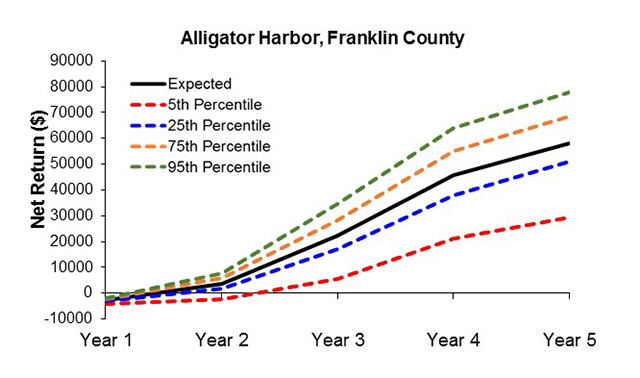 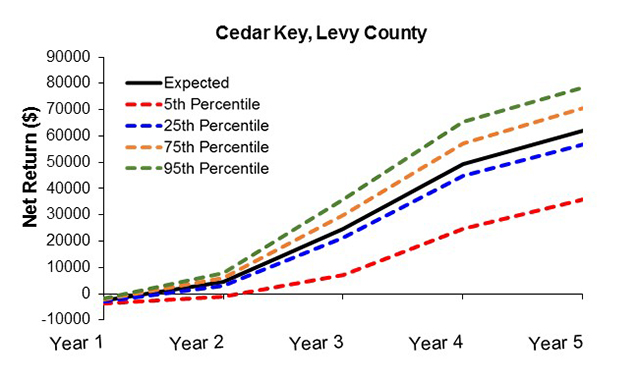 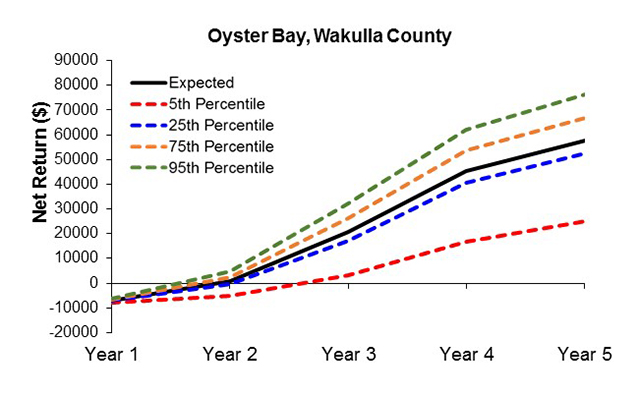 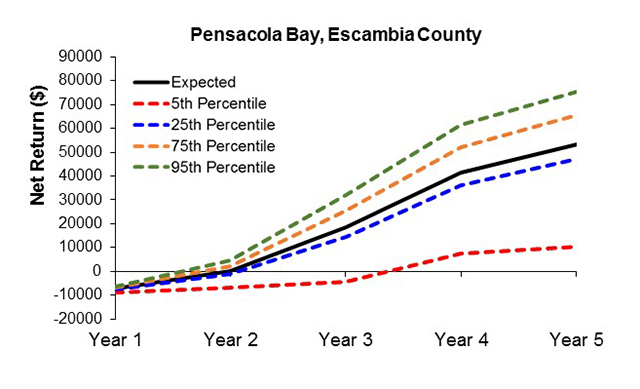