What is Risk? Oyster farming, like any aquaculture or agriculture operation, has risks that are beyond the grower’s control. Normal risk is related to occurrences, such as inclement weather, predation, fouling, or other variables, that typically can occur during production. Oyster mortality and costs associated with normal risk are factored into the farm’s potential profitability and generally are considered acceptable at a certain level. Environmental risk in oyster farming can include events such as hurricanes, major storms, or extreme changes in water quality, particularly salinity due to drought or excessive rainfall. As environmental risk increases, potential impacts include increases in 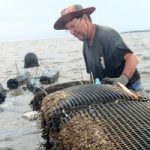 Six months after diploid (2N) and triploid (3N) seed (avg shell height: 2N, 51 mm; 3N, 54 mm) were stocked into 14 mm mesh Vexar bags, oysters were harvested in November 2017 (13-14 months from spawn). This was the second of two field trials conducted at UF’s experimental lease within the Dog Island Aquaculture Use Zone off Cedar Key to document the effects of ploidy (2N versus 3N) on production. In this study, the effects of gear design (float type and placement, see Figure 1) and biocide-free antifouling coatings (no coating versus Coatings A and B) were also examined (see 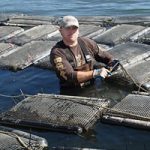 In the second set of growers’ trials, eight growers in four west coast counties (Lee, Franklin, Levy, Wakulla) received oyster seed (2500 diploids – 2N and 2500 triploids – 3N, 21-26 mm in shell height) during March through April 2017 (see March 2017 news article). Growers employed various culture methods, which allowed for evaluation of site and gear interactions with ploidy type. Once oysters were placed in culture units (bags or baskets) at final densities, growers were asked to maintain three replicate bags or baskets for each ploidy type similarly as their other oysters but not to sort, grade, or 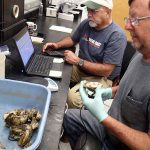 As in the first phase of the demonstration project, oysters were also cultured at the UF experimental lease off Cedar Key in the second phase. On June 7, 2017, diploid and triploid oyster seed were stocked into 14 mm mesh Vexar bags at a density of 150 per bag. The effects of float design (type and bag placement) on oyster production and fouling control were further tested in these field trials. See the June 2017 news article for more information on gear types and management practices evaluated. In addition, two commercially available, biocide-free antifouling coatings were applied to some of 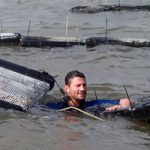 The second phase of the demonstration project evaluates the performance of diploid and triploid oysters planted in early spring, as opposed to the first phase in which oysters were planted in late summer. In addition to seed provided to participants in March (see previous article), oysters of each ploidy type were field nursed by the UF project team at their experimental lease off Cedar Key in April. At that time, diploids were 29 mm in shell height (SH) and triploids were 34 mm. Oysters were stocked into 9 mm mesh Vexar bags at densities of 700 per bag. After seven 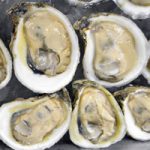 Oysters typically acquire their flavor from their growing environment and are frequently named after their harvest location. Consumers can expect variations in appearance, color, aroma, taste, and mouth-feel that influence preferences, value, and reputation. Sensory attributes and acceptability can make the difference in market success of Florida cultured oysters. Diploid and triploid oysters harvested from the UF demonstration site in Cedar Key were delivered under refrigerated conditions to the UF/IFAS Food Science and Human Nutrition Department in Gainesville on May 24, 2017 for evaluation under the guidance of Dr. Charles Sims. All rules pertaining to harvesting and handling of oysters, 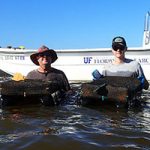 Next Crop of Seed Distributed

To quantify the effects of seasonal harvests on ploidy type, several spawns using tetraploid oysters held from the spring 2016 spawn were attempted in the fall at a participating commercial hatchery; however, viable gametes were not obtained. Since availability of triploid seed was limited, it was decided to purchase single-set seed with project funds from the Louisiana Sea Grant oyster hatchery and Auburn University shellfish hatchery. Disease certifications and ploidy verification required by the Department of Agriculture and Consumer Services for out-of-state oyster seed were obtained. These stocks were combined. A similar number of diploid seed was obtained from a 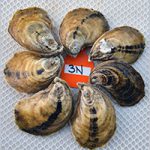 Six months after seed oysters (average 25 mm in shell height) were stocked into 14 mm mesh Vexar bags (October 2016), they were harvested in April 2017 (12 months from spawn). Replicated field trials were conducted at the UF experimental lease within the Dog Island Aquaculture Use Area off Cedar Key to document the effects of ploidy (diploid versus triploid), stocking density (125, 150, 175 oysters/bag), and float design (square versus bullet) on oyster production. To determine growth, a sample of 35 oysters from each of the 42 bags (six replicate bags per treatment) were measured for shell height, length, 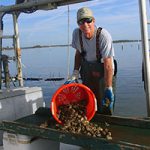 Ten growers in four west coast counties (Charlotte, Franklin, Levy, and Wakulla) participating in this project received oyster seed (2500 of each ploidy type, 20-22 mm in shell height) during July 2016 to grow on their leases. These growers used a variety of culture methods, which allowed for evaluation of site and gear interaction on ploidy type. To document production performance and assess health of diploid (2N) and triploid (3N) oysters under commercial conditions, oysters from three replicate bags (four baskets if using the adjustable longline system) for each ploidy type were provided to the UF project team at harvest. 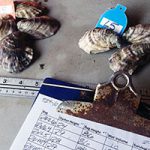 A similar number of oysters provided to project participants were also cultured at the UF experimental lease off Cedar Key so that growth and survival could be documented bimonthly during growout. Oysters (ave 26 mm shell length) were stocked in 14 mm mesh bags in October (see previous post) and sampled in December 2016 and, again, in February 2017. Three bags from each of the density and ploidy combinations, a total of 18 bags, were sampled each period. These bags were supported with square floats; in addition, three bags supported with bullet floats were also sampled. Different replicate bags were