Six months after diploid (2N) and triploid (3N) seed (avg shell height: 2N, 51 mm; 3N, 54 mm) were stocked into 14 mm mesh Vexar bags, oysters were harvested in November 2017 (13-14 months from spawn). This was the second of two field trials conducted at UF’s experimental lease within the Dog Island Aquaculture Use Zone off Cedar Key to document the effects of ploidy (2N versus 3N) on production. In this study, the effects of gear design (float type and placement, see Figure 1) and biocide-free antifouling coatings (no coating versus Coatings A and B) were also examined (see June 2017 news article for details). Growth was determined by measuring 50 oysters from each bag (four replicates per treatment) for shell height, length, and width (Figure 2). Subsequently, meats were weighed on five of these oysters. Another five oysters per bag were frozen for later analyses of dry meat weight, condition index, and biofouling. Survival was determined for each bag by counting the number of live oysters per bag and dividing by the total number of oysters (dead and live). A sample of five oysters per bag were shipped to Dr. Susan Laramore for assessment of health (presence of parasites). Pictures were taken to document appearance of external and internal shells as well as meats.  Additionally, accumulation of biofouling on each bag was measured by weighing the bags after emptying the oysters and then subtracting the weight of the same bag measured before deploying in June 2017. These data were statistically analyzed to determine significant effects of the treatments (ploidy, gear design, antifouling coating). As in the first trial, time associated with culture equipment construction and maintenance was estimated throughout the trial to approximate labor costs. Along with seed and gear costs, labor inputs (time and wages) will help to assess the profitability of oyster culture in Florida. 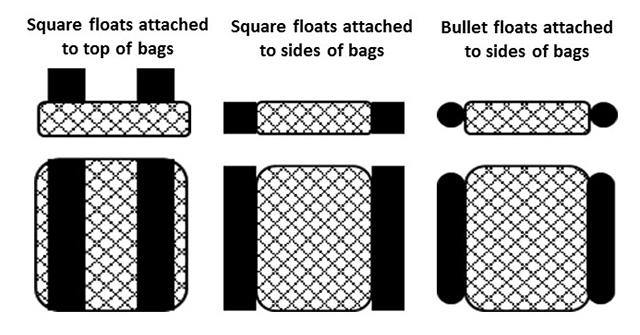 After six months in the 14 mm growout bags (a total of eight months in the field), the two ploidy types were compared. Measurements were averaged by ploidy across the three gear designs. Triploid shell height averaged 77 mm (3.0”), which was significantly higher than the average height of diploid oysters (56 mm, 2.2”) (Figure 3). Total weights were also significantly different with triploids averaging 122.8 grams (3.7/lb) and diploid oysters averaging 54.8 grams (8.3/lb). Likewise, meat weights (wet) differed with triploids averaging 8.7 grams and diploids averaging 5.0 grams (Figure 3). Interestingly, despite the better growth observed in the triploids, condition index was significantly higher in diploid oysters (CI: 2N, 9.3; 3N, 7.8). Condition index, an estimate of the meat yield, is a relationship between dry meat weight, wet meat weight, and shell weight. Although meats of the diploids weighed less than triploids, their shells also weighted much less than triploid shells. External appearances were distinctive between ploidy types with diploid shells exhibiting a much smoother, worn appearance (Figure 4). It is possible that the smaller size of the diploid oysters made them more susceptible to wave action, thus the associated shell shaping. Survival was similar between ploidy types, averaging 77% among triploids and 74% among diploid oysters at the end of the trial (Figure 5).

Figure 3. Differences in growth of diploid (2N) and triploid (3N) oysters cultured in 14 mm mesh Vexar bags. These data were averaged across the three float designs tested. White lines at the top of each bar represent the standard deviation, which is the variation among replicate bags. 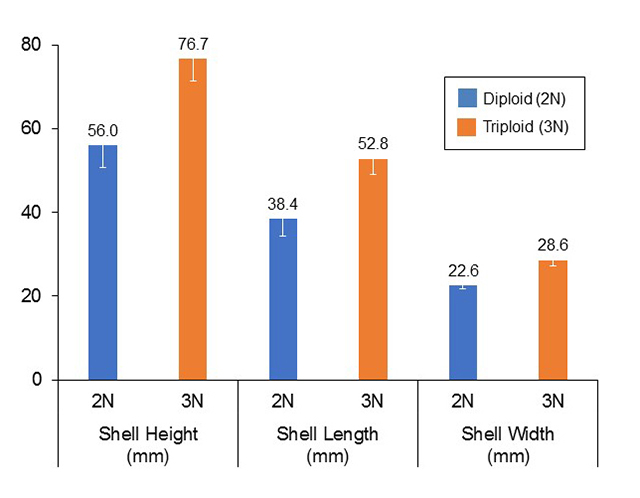 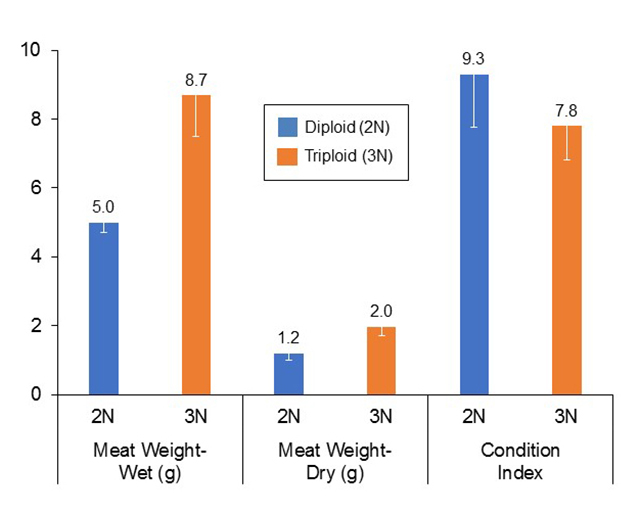 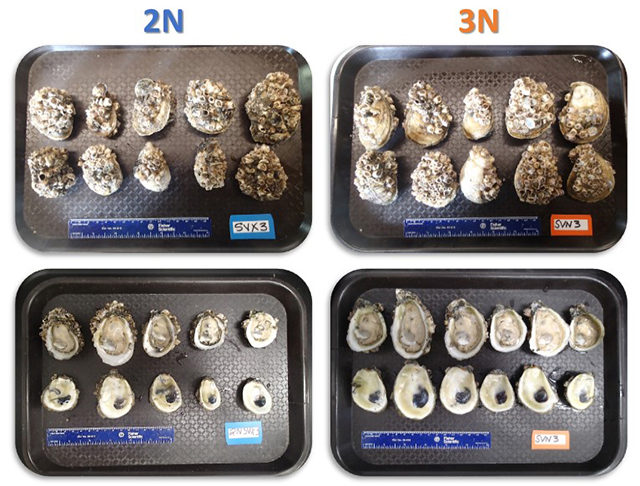 Figure 5. Survival of diploid (2N) and triploid (3N) oysters over a six-month growout period from June through November 2017 culture in 14 mm floating bags. These data were averaged across float designs. 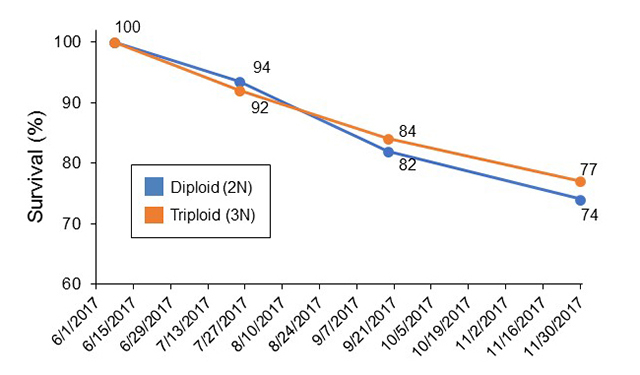 No significant differences were observed in growth (shell height, total weight, meat weight) or survival among triploid oysters cultured using three float designs (Figure 6). However, float design did have a significant effect on biofouling accumulation of the gear. Bags supported with square floats attached to the top of the bag had the most fouling at an average of 17.9 lbs. The same floats attached to the sides of the bags resulted in minimal fouling accumulation, averaging only 1.3 lbs. These results were surprising as the square floats placed on top of the bags aided in supporting bags and oysters out of the water during weekly aerial drying, whereas bags supported with square floats on the sides did not during weekly flipping. Given the culture conditions, the control method of flipping bags with floats attached to the sides of the bags is adequate is reducing fouling on the gear (but not necessary on the oysters, read further), which reduces labor input in half as the bags do not need to be flipped back after the drying period. Bags supported with the smaller bullet floats placed on the sides of the bag resulted in an intermediate level of biofouling (avg weight: 7.3 lbs).

Figure 6. Growth and survival of triploid (3N) oysters cultured in 14 mm Vexar bags supported by three float designs. Black lines at the top of each bar represent the standard deviation, which is the variation among replicate bags. 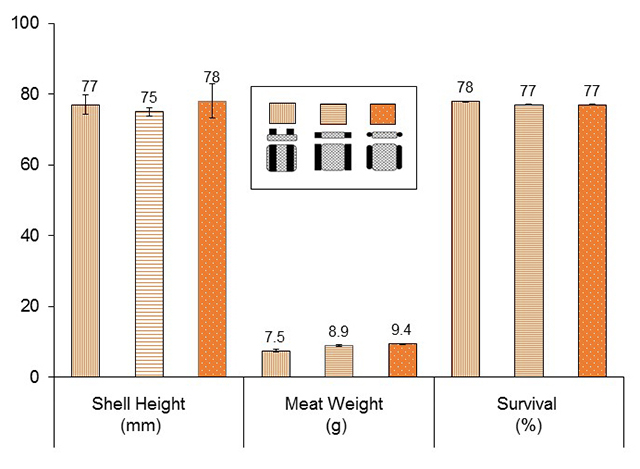 Application of either biocide-free antifouling coating (A or B) did not significantly affect oyster production in terms of growth (shell height, total weight, meat weight, condition index) or survival. When applied to 14 mm Vexar bags with square floats attached to the tops of bags, antifouling coatings did appear to reduce biofouling. Bags treated with Coating B had 8.6 lbs of biofouling and those treated with coating A had 14.1 lbs, whereas untreated bags had 17.9 lbs of biofouling. However, these differences were not statistically significant. Altering gear design, specifically attaching square floats to the sides of bags, was more effective in reducing biofouling. Uncoated bags with this float placement had significantly less biofouling weight (avg 1.3 lbs) than those bags with square floats placed on top of the bags (avg 17.6 lbs). Figure 7 illustrates the differences in biofouling based on float design and placement as well as use of antifouling coatings. Biofouling organisms consisted primarily of barnacles, hooked mussels, macroalgae, and some oyster spat. 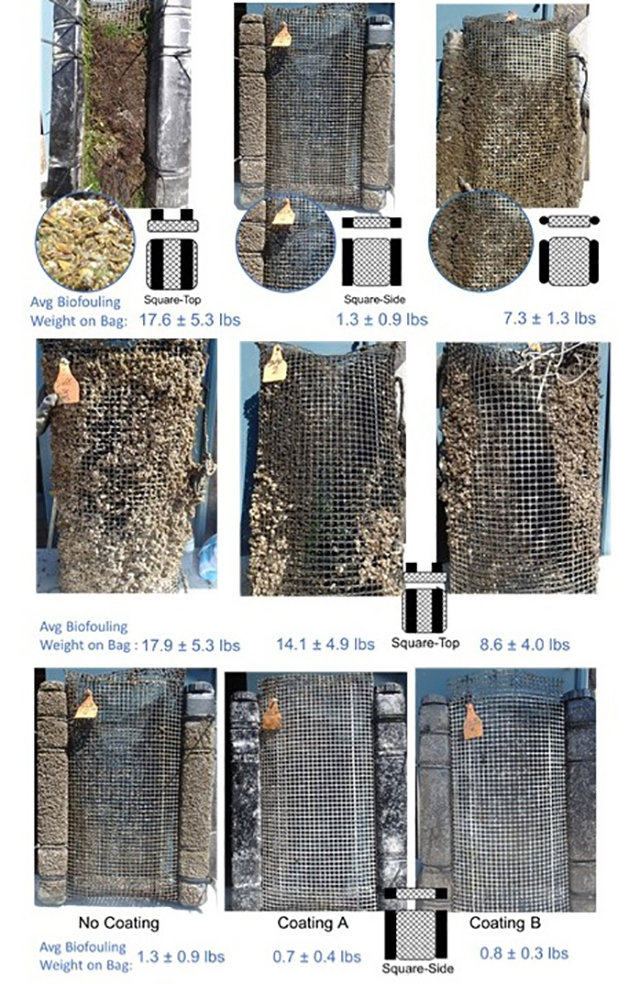 Shell measurements (height, length, width) are used to calculate fan ratio (shell length/shell height) and cup ratio (shell width/shell height). Fan ratios of 0.66 and above and cup ratios of 0.33 and above are considered favorable by industry experts for half shell oysters designated for raw bars (Figure 8). Fan ratios were similar for diploid and triploid oysters (2N, 0.66; 3N, 0.64) as were cup ratios (2N, 0.38; 3N, 0.36); ratios for both ploidy types were within or exceeded the favorable ranges.

After shucking oysters to measure meat weights, internal shells were photographed to document presence of the mudworm (Polydora websteri). This parasite burrows into the shell and in severe infestations degrades the structural integrity and appearance of the host’s shell. While some signs of the mudworm were observed, their presence was largely negligible and did not appear to reduce shell structure or marketability.

As was noted in the previous UF trial, the same environmental conditions that enable fast and year-round oyster growth in Florida (especially warm water temperatures) often make good growing conditions for biofouling organisms as well. Sets of natural occurring (“wild”) oyster spat were experienced throughout the first trial (October 2016-April 2017). During this trial (June-November 2017), the predominant fouling organism was barnacles. Contrary to the first trial, natural spat recruitment on the cultured oysters was not prevalent. To quantify biofouling, oysters were weighed before and after removal of all fouling organisms from the shells to determine percentage of fouling weight (fouling weight/shell weight). Neither ploidy, float design, nor antifouling coating affected the amount of biofouling determined using this method. Among treatments, biofouling weight ranged from 67-105% of shell weight (Figure 9). 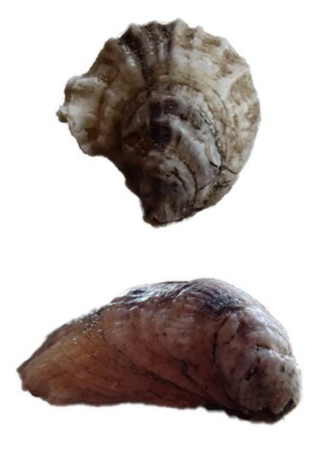 Figure 9. Ratio of biofouling weight to shell weight among three float designs used in culturing diploid (2N) and triploid (3N) oysters. White lines at the top of each bar represent the standard deviation, which is the variation among replicate bags. 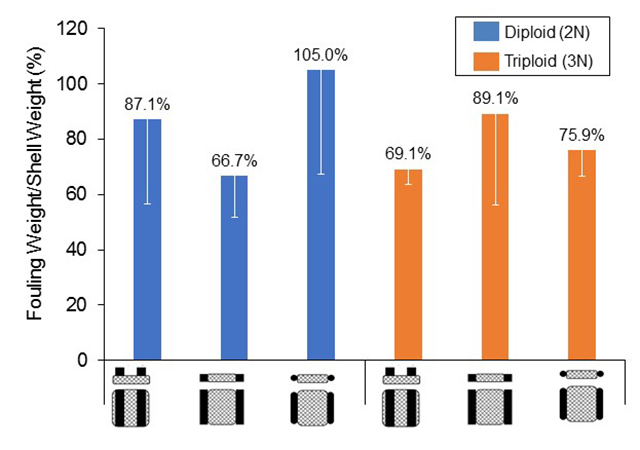 The results of both UF field trials were compared to examine seasonal effects on oyster production. Growth and survival of both ploidy types were higher during the first trial (October 2016-April 2017) when compared to the second trial (June 2017-November 2017) (Figure 10). Data loggers were used to measure water temperature in culture bags during both trials. Temperatures were lower during the first trial (avg 67.5°F) than the second trial (avg 83.1°F) with temperatures periodically exceeding 90°F in the second trial (Figure 11). While Florida’s warm waters are generally conducive to fast growth of bivalves, it is possible that summer temperatures may reach stressful, which could inhibit growth and increase mortalities.

Figure 10. Growth of diploid (2N) and triploid (3N) oysters cultured over two seasonal trials – “winter” (October 2016 – April 2017) and “summer” (June – November 2017). White lines at the top of each bar represent the standard deviation, which is the variation among replicate bags. 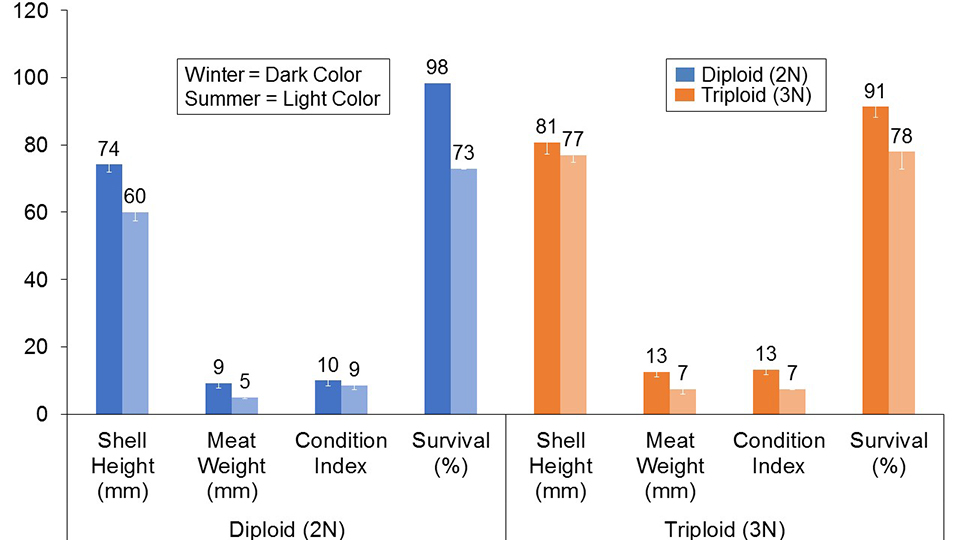 Figure 11. Water temperatures recorded through two seasonal trials in which diploid (2N) and triploid (3N) oysters were cultured from October 2016 through April 2017 (“winter”) and from June through November 2017 (“summer”) in Cedar Key, Florida. 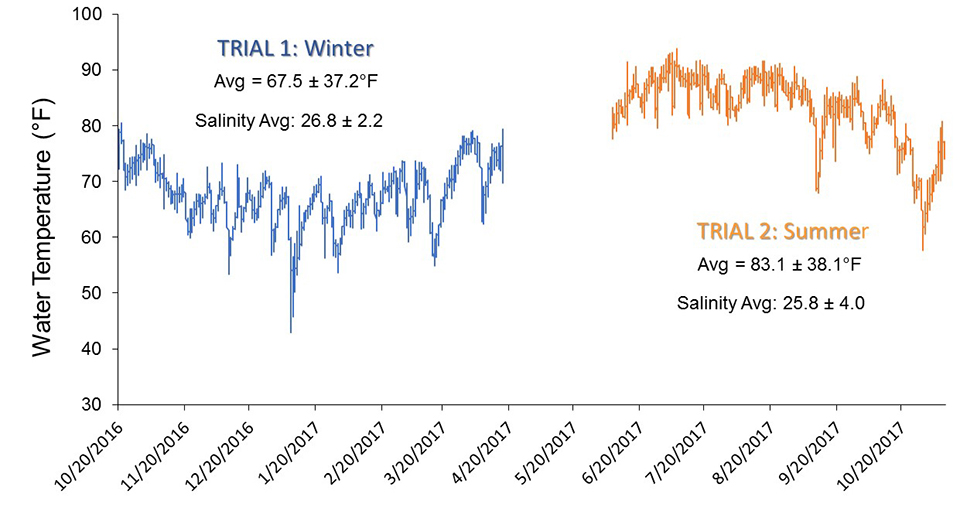