A similar number of oysters provided to project participants were also cultured at the UF experimental lease off Cedar Key so that growth and survival could be documented bimonthly during growout. Oysters (ave 26 mm shell length) were stocked in 14 mm mesh bags in October (see previous post) and sampled in December 2016 and, again, in February 2017. Three bags from each of the density and ploidy combinations, a total of 18 bags, were sampled each period. These bags were supported with square floats; in addition, three bags supported with bullet floats were also sampled. Different replicate bags were sampled in December and February. At each sample period, 50 oysters from each replicate bag were measured for shell dimensions (height, length, width) and weighed (total weight). All live and dead oysters in each bag were counted to determine survival. Diploid (2N) and triploid (3N) oysters were photographed to document their appearance at the time of sampling. Results from each sample period follow.

December 2016 Sample Period (8 months post-spawn, 2 months growout)
After two months of growout in 14 mm mesh bags, shell height was similar for both ploidy types with triploids averaging 61 mm and diploids averaging 59 mm. However, differences in weight were observed with total weight of triploid oysters (ave 45 grams) significantly higher than diploid oysters (ave 31 grams). Ploidy did not have a significant effect on survival with diploids and triploids averaging 99% and 98%, respectively. Oysters in bags supported by the two float types were also compared. No significant differences in growth or survival were observed between square and bullet floats. Likewise, stocking densities did not significantly affect oyster production during this timeperiod.

Diploid oysters (left) and triploid oysters (right) after two months in growout culture. The “L” on tags refers to samples from replicate bags stocked at the low density treatment.

The following graphs illustrate growth (shell height and total weight) of diploid and triploid oysters stocked in 9 mm mesh bags during August (2016) through September and in 14 mm bags during the October and February (2017) sample events, a period of six months. Measurements of oysters on October and February were averaged by oyster type across all stocking densities. Survival of oyster types by stocking density in February is also presented. The error bars or lines (black in shell height graph and white in weight and survival graphs) illustrate variation among the measured parameters in replicate bags. 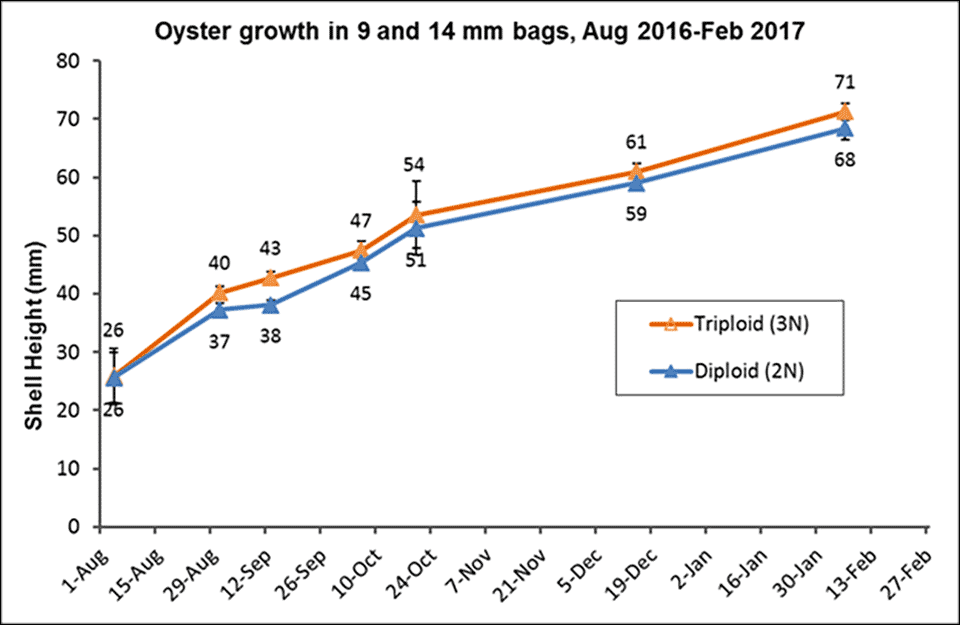 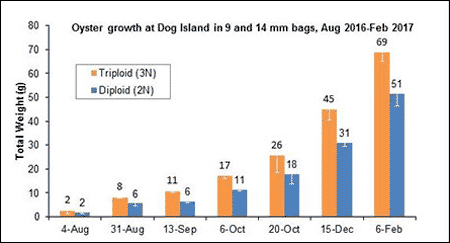 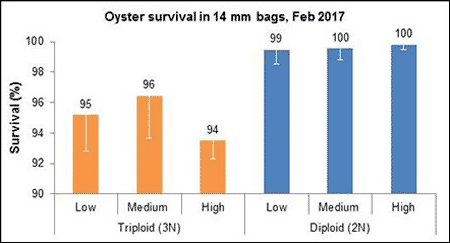 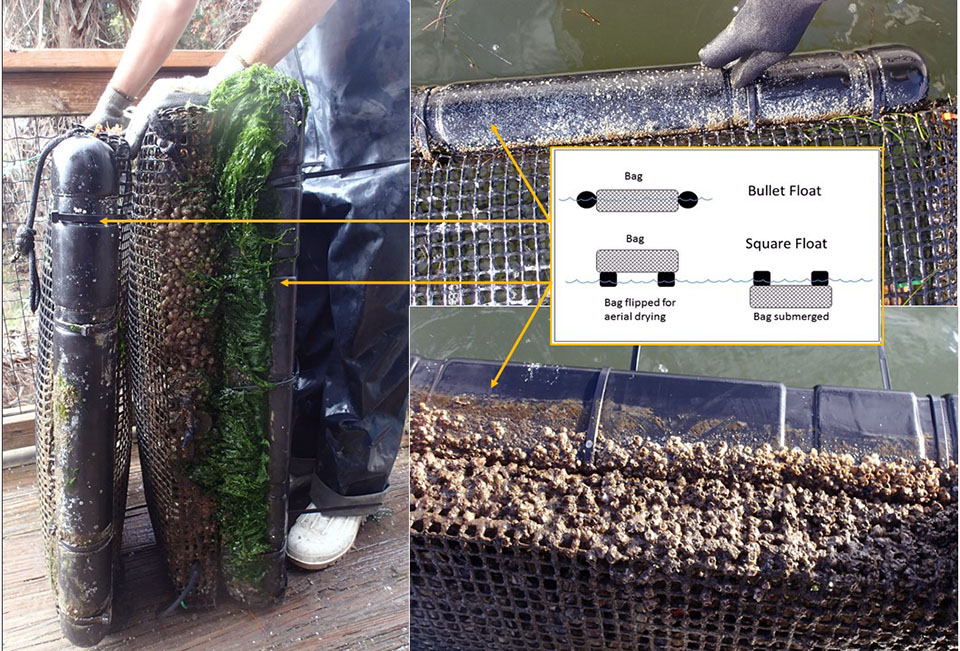 Weather damage
Two weather events resulted in bags being damaged during this timeperiod. Between December 5 and 6, average wind speeds of 14 knots and gusts up to 27 knots caused one bag to flip exposing oysters to air and pushing them to one corner of the bag. There was no damage to the oysters or gear as the site was inspected just after the event. A more severe weather event occurred on January 22 and 23 with average wind speeds of 19 knots and gusts as high as 50 knots (see picture below). This resulted in substantial damage to gear requiring immediate attention. A total of 14 bags were flipped (exposing oysters to air in the drying position) by the combination of wind and high seas. A rope attaching one bag to the longline was broken and ropes on 22 bags were frayed. Ten of the 22 frayed ropes were replaced. However, even those ropes, which were moderately frayed, were replaced in following weeks due to concerns that they would eventually break. Additionally, cable (zip) ties were broken and/or missing on at least 14 bags and one bag was found emptied of oysters. These two occurrences emphasized the importance of checking floating gear as soon as possible after a weather event.