Six months after seed oysters (average 25 mm in shell height) were stocked into 14 mm mesh Vexar bags (October 2016), they were harvested in April 2017 (12 months from spawn). Replicated field trials were conducted at the UF experimental lease within the Dog Island Aquaculture Use Area off Cedar Key to document the effects of ploidy (diploid versus triploid), stocking density (125, 150, 175 oysters/bag), and float design (square versus bullet) on oyster production. To determine growth, a sample of 35 oysters from each of the 42 bags (six replicate bags per treatment) were measured for shell height, length, and width and weighed (see Figure 1). Five oysters per bag were shucked and meats weighed. Pictures of meats and shells (external and internal) were taken to document appearance. In addition, a sample of five oysters per bag were shipped to Dr. Susan Laramore for assessment of health (presence of parasites). Another five oysters per bag were preserved for verification of ploidy, as well as 10 per bag were frozen to analyze later for dry meat weight, condition index, and biofouling. Survival was determined by counting the number of live oysters per bag and dividing by the number of oysters originally stocked. These data were statistically analyzed to determine the significance of ploidy, stocking density, and float design on oyster growth and survival. Throughout the six-month trials, the amount of time required to complete various tasks was recorded. This information, which will be used to approximate labor costs, along with seed and gear costs will help to estimate profitability based on production data obtained in these trials. 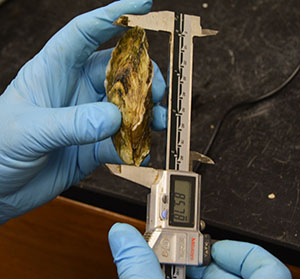 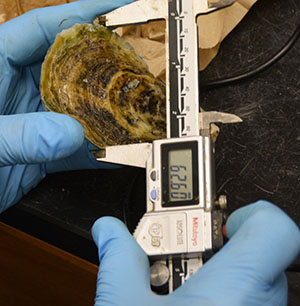 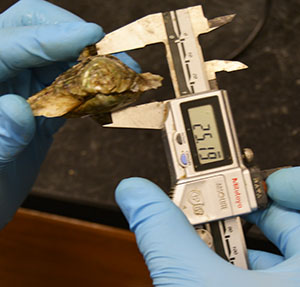 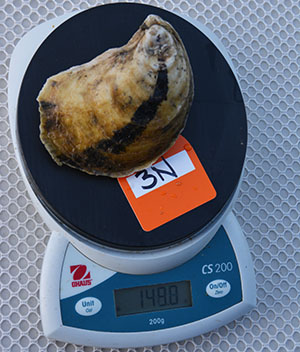 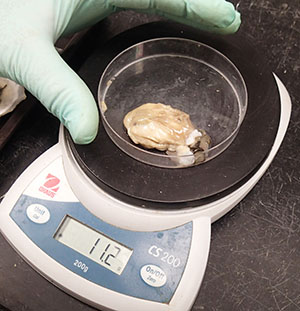 Figure 2. The differences in growth and survival of diploid and triploid oysters cultured in 14 mm mesh bags supported by square floats are illustrated below. These data were averaged across stocking densities tested; the number of replicate bags was 18 per ploidy type. White lines at the top of each bar represent the standard deviation, which is the variation among replicate bags. 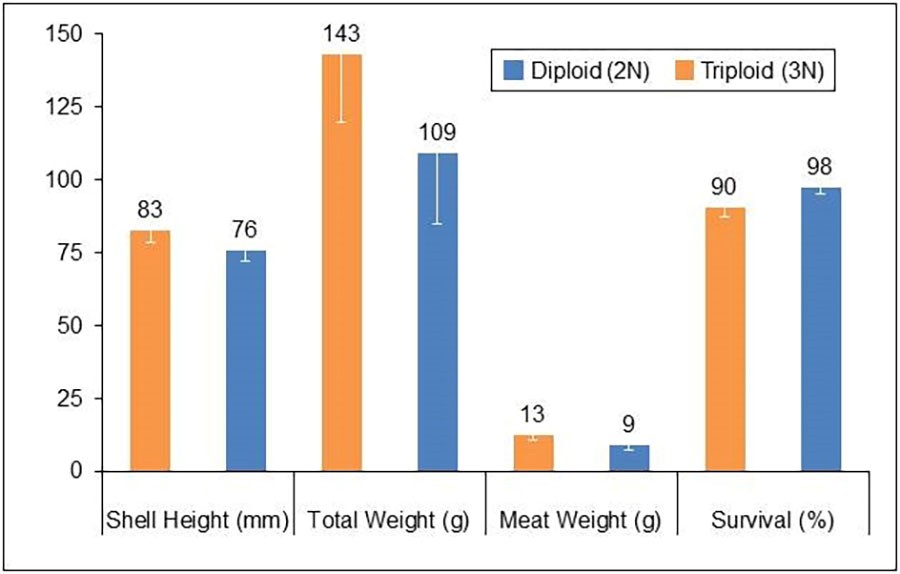 Figure 3. Average shell height, total weight, meat weight, and survival among three stocking densities (low, medium, high) are shown for diploid (2N) and triploid (3N) oysters. The number of replicate bags were six per density. White lines at the top of each bar represent the standard deviation, which is the variation among replicate bags. 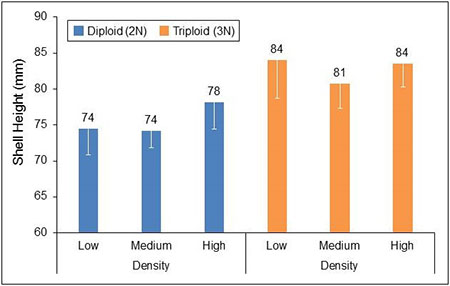 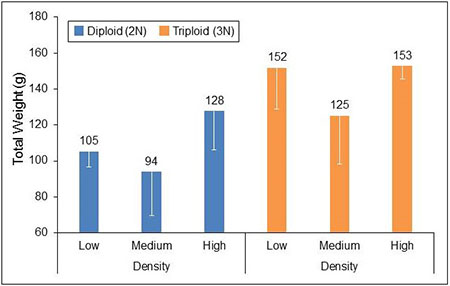 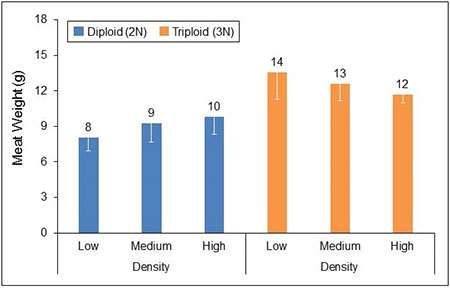 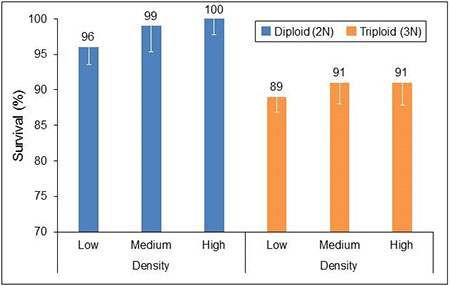 At harvest, triploid oysters grown in bags with bullet floats attached to the sides (n=6, average 88 mm SH) were significantly larger than triploid oysters grown in bags with square floats attached to the bottom (n=6, average 81 mm SH) (Figure 4). However, survival of oysters differed significantly in bags supported with square floats (91%) when compared to oysters in bags supported with bullet floats (84%). The square floats were 4.5” x 4.5” x 35” in length; whereas the bullet floats were 3.25” in diameter and 32” in length. As the oysters grew and bags became heavier, the bullet floats did not have enough buoyancy to support the weight. During the last month of the culture period, all bullet float-supported bags were found vertical in the water column, which resulted in oysters being crowded at one end of the bag. This most likely contributed to increased mortality. 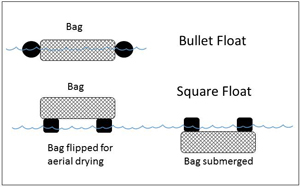 Figure 5. This graph summarizes growth (shell height, total weight, meat weight) and survival of triploid oysters cultured in 14 mm mesh bags supported by two float types (square and bullet). White lines at the top of each bar represent the standard deviation, which is the variation among replicate bags. 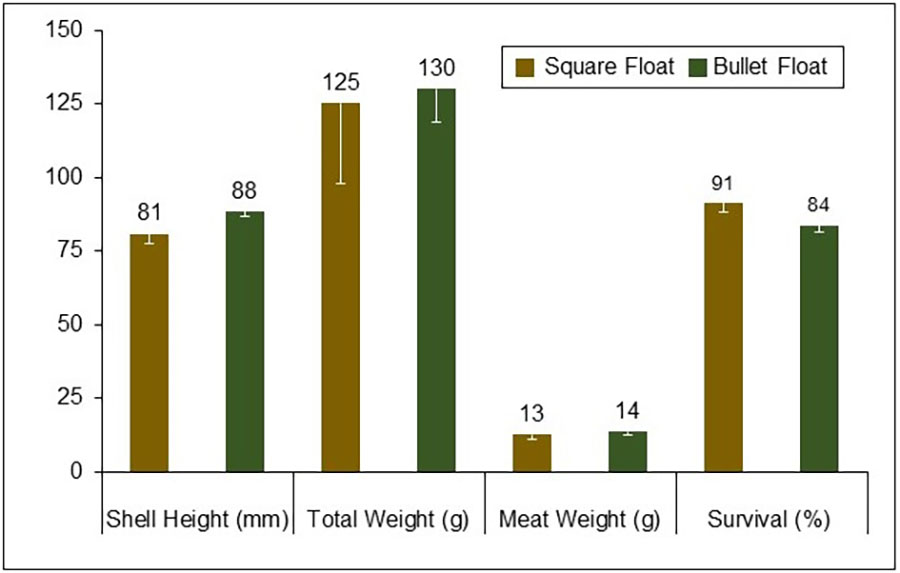 External Shell Appearance and Meats Shell measurements (height, length, width) are used to calculate fan and cup ratios to determine if external shell appearance is appealing for the half shell market. This has not yet been determined for data obtained in the UF trials. Pictures in Figure 6 below show a distinct difference between the two ploidy types, with triploids maintaining their characteristic black “strike” on top of the shells. At the time of harvest, there was a high prevalence of mature gametes (reproductive cells) in the meats of diploid oysters as they began to “ripen up”. This development is typical in the spring when waters begin to warm and oysters prepare to spawn. The presence of gametes gives oysters a different taste. Further, diploid oysters become deflated after spawning, rendering them unappetizing and potentially less valuable until they increase glycogen (“fat”) reserves in the following months. Triploid oysters, which are effectively sterile, should maintain a consistent form and flavor throughout the year, an added benefit to increased growth rates typically associated with them. It was observed that over 90% of the diploid oyster meats sampled had partially developed gonads. In May, diploid and triploid oysters from these trials will be rated for appearance, texture, flavor, and overall acceptability by panelists at the UF/IFAS Aquatic Food Production Pilot Plant. 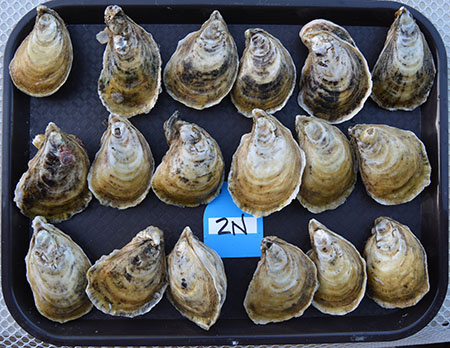 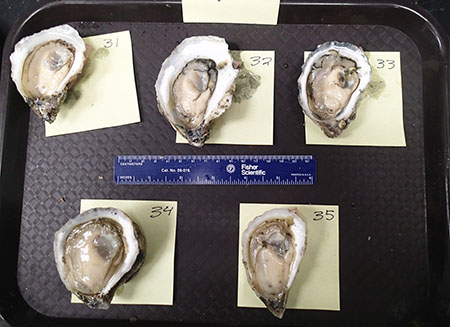 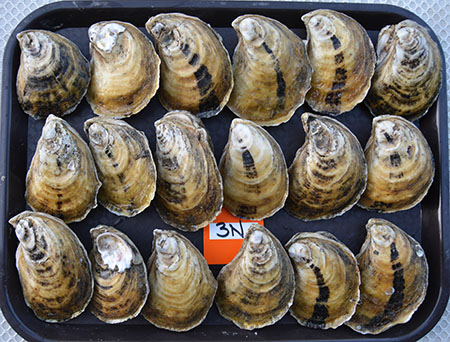 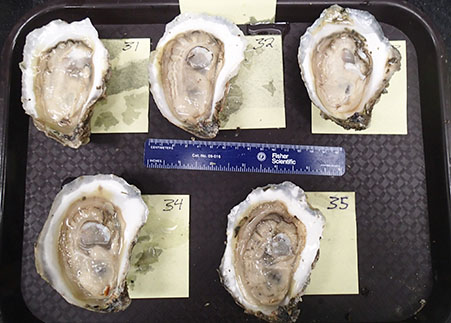 Internal Shell Appearance After oysters were shucked to obtain meats for weighing, the shells were photographed and the presence or absence of parasites and biofouling noted. The burrowing mudworm (Polydora websteri) is a common pest found in oysters. Severe infestations result in blisters on the internal shell, which leaves the shell brittle and prone to breaking (Figure 7).  In addition, it detracts from the appearance of the product. Fragile and unattractive shells reduce the value of oysters that are harvested for the half shell market. There were no signs of mudworms in either the diploid or triploids oysters (Figure 7). All shells had a creamy white and yellowish coloration and were devoid of blisters associated with mudworm infestations.

Figure 7. Shells of triploid oysters from this study (left and middle) and shells with severe mudworm damage (right). The photograph on the right was obtained from a study conducted by Auburn University researchers (Gamble et al. 2016). 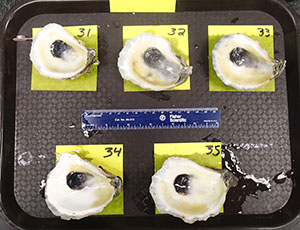 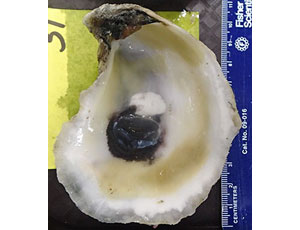 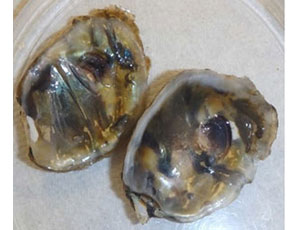 Biofouling The warm water temperatures in Florida allow for accelerated and year-round growth of oysters; however, these conditions can also increase the presence of biofouling organisms, such as barnacles or sea squirts. In these field trials, oyster spat naturally recruited from “wild” oysters were the predominant fouling organism found on diploid and triploid oysters. At harvest, spat were counted on oysters from each bag to determine the percent fouling. Oysters with zero to two (0-2) spat were considered marketable. Regardless of ploidy or density, oysters had an average of 67-73% 0-2 spat per shell. Triploid oysters in bags supported by bullet floats were less fouled with an average of 76% 0-2 spat per shell. It is interesting to note that a shellfish processing plant in Cedar Key efficiently culled oysters from this study that were heavily spatted (3-8 per shell) using wire clippers, making them saleable as single oysters.

Figure 8. The graph below shows the average proportion of oysters with zero to two (0-2) spat per shell for each ploidy and stocking density combination. White lines at the top of each bar represent the standard deviation, which is the variation among replicate bags. 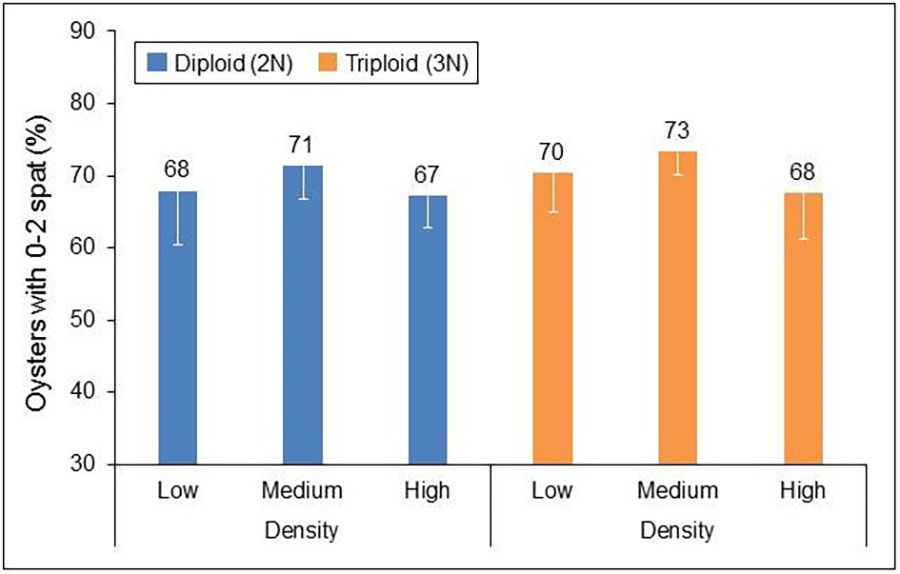